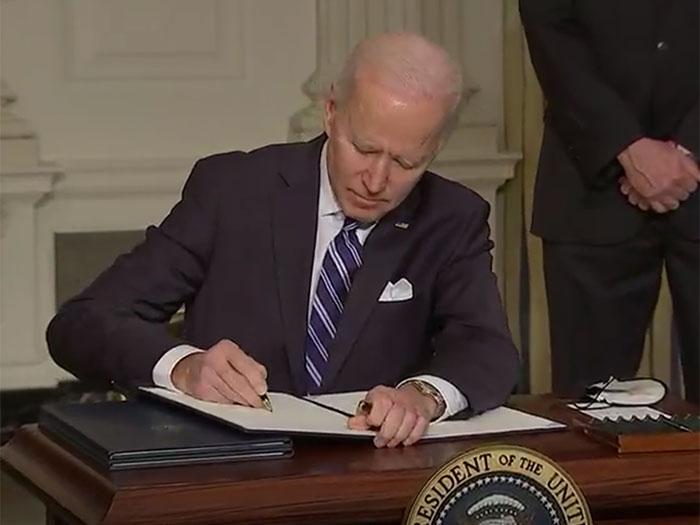 President Joe Biden yesterday signed a number of Executive Orders that follow through on a commitment to take aggressive action on climate change that began on his first day in office with rejoining the Paris Agreement.

On a global scale, it is clear that the Biden administration will be fully onboard with international efforts to combat climate change, including those relating to decarbonizing shipping.

Closer to home, one of the orders signed yesterday directs the Secretary of the Interior to pause on entering into new oil and natural gas leases on public lands or offshore waters to the extent possible, launch a rigorous review of all existing leasing and permitting practices related to fossil fuel development on public lands and waters, and identify steps that can be taken to double renewable energy production from offshore wind by 2030.

That was greeted with enthusiasm by the Business Network for Offshore Wind.

“President Biden’s actions today confirm the critical role that offshore wind energy will play in creating a clean U.S. energy grid and achieving White House commitments to combat climate change,” said Liz Burdock, the Business Network’s president and CEO. “His call to double offshore wind production in U.S. federal waters sends a clear signal of support to our industry, which will generate billions in new investments. Over the next few years, the offshore wind industry will dramatically scale up development of the U.S. supply chain, growing tens of thousands of new jobs in the process. Offshore wind has been on the precipice of significant growth thanks to states’ bold leadership and President Biden’s executive order further pushes the industry to new heights with a new sense of urgency.”

Though there may be a pause on new lease sales, that doesn’t spell an immediate end to offshore drilling.

“OMSA understands that the offshore oil and gas production in the Gulf of Mexico is a vital component of our national and economic security.

“A ‘pause’ in leases and permits for offshore energy projects is also a pause in opportunities for the 345,000 Americans working in offshore energy. It is disappointing to see the Administration risk these good-paying jobs just as we started to see glimmers of hope following the COVID-19 pandemic.

“By stopping U.S. offshore oil and gas leasing and permitting, the Biden Administration stands in sharp contrast to our international competitors, even environmentally conscious competitors like Norway, that are opening new territories to drilling and doubling down on the support they provide their oil and gas industries.

“While the Executive Order talks about increasing offshore wind goals, the vessels and mariners necessary to construct tomorrow’s wind projects are the same ones harmed by today’s moratorium on the oil and gas industry. If this continues, these assets won’t be around when the wind industry moves from a goal to a reality.

“While we look forward to working with the Biden Administration to enhance our shared priorities of advancing the domestic maritime industry and domestic offshore wind industry, today we are disappointed in this big step backward on both accounts.”

If you are interested in learning more about how the new administration will impact the maritime industry, check out our TTB (Tug, Towboats & Barges) free virtual conference taking place on March 23 and 24. Registration is now open.