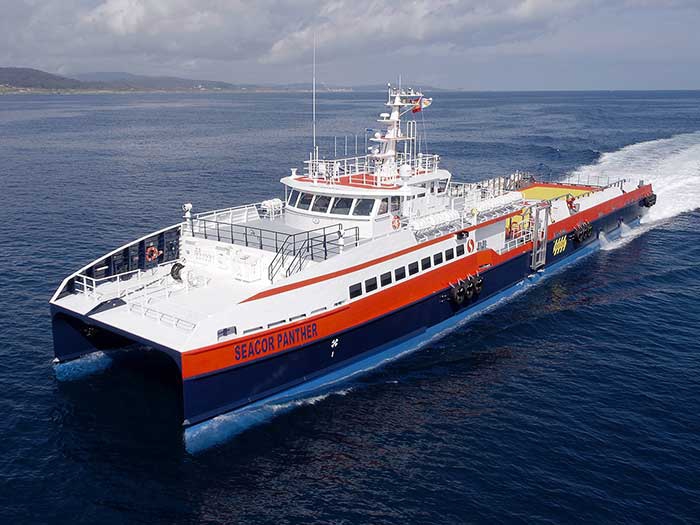 The two forward engines will run Jason FiFi 1 class pumps off the front of the engine.

“These engines afford us with additional horsepower over the previous catamarans propulsion machinery,” said SEACOR’s Project Manager, Joe McCall. “The mission of these vessels will be the same as the previous catamarans, to deliver time sensitive cargoes and passengers at grater speeds than a typical crewboat. Additionally, the sea-keeping qualities afforded by the twin hulls, ensures that the passengers will have a very fast and comfortable ride.”

“Another quality that is important to our customers is the reliability of the vessel,” added McCall. “These vessels have multiple independent and redundant systems.”

The SEACOR Puma and SEACOR Panther were built in an enclosed facility at the Asilleros Amon shipyard in Burela.

The enhanced seating that is fitted in the passenger saloon allows up to 138 passengers to rest in first class comfort or they can choose from the various amenities available to them, such as satellite TV, Wi-Fi or snacks from the refreshment area. The vessel is fitted with a hospital, so the vessel can also fulfill the role of medical evacuation platform if the need should arise.