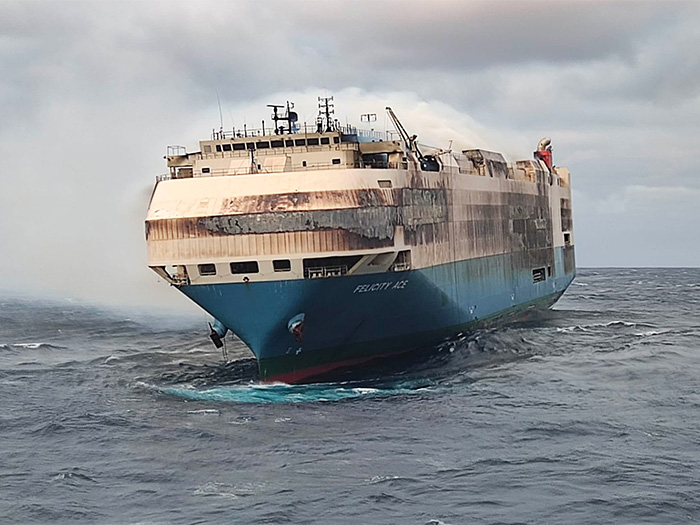 Fire and explosion incidents cause the most expensive insurance claims in the marine industry, while at a time of rising exposures and inflation, cargo damage is the most frequent cause of loss, according to Allianz Global Corporate & Specialty (AGCS). The marine and cargo insurer analyzed more than 240,000 marine insurance industry claims worldwide between January 2017 and December 2021, worth approximately EUR 9.2 billion in value, and has identified a number of claims and risk trends that are driving major loss activity in the sector.

Inflation is another key concern for marine insurers and their policyholders as recent increases in the values of ships and cargos mean losses and repairs are becoming more expensive when things go wrong.

“The number of fires on board large vessels has increased significantly in recent years, with a string of incidents involving cargo, which can easily lead to the total loss of a vessel or environmental damage,” says Régis Broudin, Global Head of Marine Claims at AGCS. “At the same time, the shipping sector is also having to deal with many other challenges including a growing number of disruptive scenarios, supply chain issues, inflation, time-pressured crew members and employees, increasing losses and damages from extreme weather events, implementing new low-carbon technology and fuels, as well as Russia’s invasion of Ukraine.”

Fires accounted for 18% of the value of marine claims analyzed (equivalent to around EUR 1.65 billion compared with 13% for a five-year period ending July 2018. A contributing factor to this increase of fire risk on board vessels is often mis-declared/non-declaration (of) dangerous cargos, while a recent increase in engine room fires may reveal some underlying risk around crew competencies. The potential dangers that the transportation of lithium-ion batteries on vessels pose only add to these concerns, with AGCS having already seen a number of incidents. A separate report from AGCS highlights a full list of loss prevention measures to consider.

With many countries seeing inflation rates at or around 10%, this is compounding existing trends driving higher claims severity. The rising prices of steel, spare parts and labor are all factors in the increasing cost of hull repair and machinery breakdown claims.

In addition, the value of both vessels and cargo has been increasing at a time of growing exposures associated with bigger ships, the largest of which can carry 20,000 containers at one time. The combined value of the global merchant fleet increased 26% to $1.2 trillion in 2021, while the average value of container shipments has also been rising with more shipments of high-value goods such as electronics and pharmaceuticals. It is not unusual to see one container valued at $50 million or more for high-value pharmaceuticals.

Damaged goods, including cargo, is the top cause of marine insurance claims by frequency, and the third largest by value, the AGCS analysis shows. The most common claims are physical damage, typically from poor handling, storage and packing. However, recent years have also seen a number of high-value theft and temperature variation claims – the latter can particularly impact pharmaceuticals. Theft is the third most frequent cause of claims with criminals targeting consumer electronics and high-value commodities such as copper. Cargo is typically stolen from ports, warehouses or during transits. The recent boom in container shipping has also affected cargo claims with a global shortage having resulted in substandard and damaged containers being brought back into use resulting in losses.

“The risk of theft and damage to high-value cargos needs to be addressed with additional risk mitigation measures, such as GPS trackers and sensors that provide real-time monitoring on position, temperature, moisture shock, and light and door openings, for example,” says Captain Rahul Khanna, Global Head of Marine Risk Consulting at AGCS. “At the same time cargo interests need to keep a close eye on insured values. Clients may need to adjust their insurance and policy limits, or risk being underinsured – we have already seen claims for high value container cargos where the cargo interest was underinsured by as much as $20 million.”

AGCS also identifies a number of risk trends in the analysis that are likely to impact loss activity in the marine sector – both today and in the future:

Sources of disruption continue to increase: Recent years have seen a number of maritime incidents, natural catastrophes, cyber-attacks and the COVID-19 pandemic cause major delays to shipping and ports. Further disruption has also been caused by congestion, labor shortages and constrained container capacity. There are also greater concentrations of cargo risk on board large container vessels and in major ports, so any incident has the potential to simultaneously affect large volumes of cargo and companies.

Commercial pressures are already a contributing factor in many losses that have resulted from poor decision-making, says ACGS. With the pressure on vessels and crew currently high, the reality is that some may be tempted to ignore issues or take shortcuts, which could result in losses.

Climate change is increasingly affecting marine claims: Natural catastrophes is already the fifth biggest cause of marine insurance claims, by frequency and severity according to AGCS analysis. Extreme weather was a contributing factor in at least 25% of the 54 total vessel losses reported in 2021 alone, while drought in Europe during 2022 again caused major disruption to shipping on the Rhine. In the U.S/, it dropped inland waterways around the Mississippi River to levels not seen for decades, impacting global transportation of crops such as grain.

Efforts to decarbonize the shipping industry, which is a major contributor to global greenhouse gas emissions (GHGs) will also impact claims going forward. Reducing GHGs requires the shipping industry to develop more sustainable forms of propulsion and vessel design and use alternative fuels. While the introduction of new technology and working practices is needed to move to a low-carbon world, it can result in unexpected consequences. Insurers have already seen a number of machinery breakdown and contaminated fuel claims related to the introduction of low sulfur fuel oil in recent years as part of the move to cut sulfur oxide emissions. Machinery breakdown is already the fourth largest cause of claims by frequency and value.

Russia’s invasion of Ukraine has had multiple impacts on the shipping industry, with the loss of life and vessels in the Black Sea, trapped vessels in blocked Ukrainian harbors and the growing burden of compliance with sanctions. Although the signing of the Black Sea Grain Initiative in July 2022 enabled some vessels trapped in ports to move out of the conflict zone others remain. The full value of these trapped vessels is unclear, but industry reports have estimated it could be as much as $1 billion. Under some marine hull and cargo insurance policies an insured party may be able to claim for a total loss after a specific time has passed since the vessel/cargo became blocked or trapped.