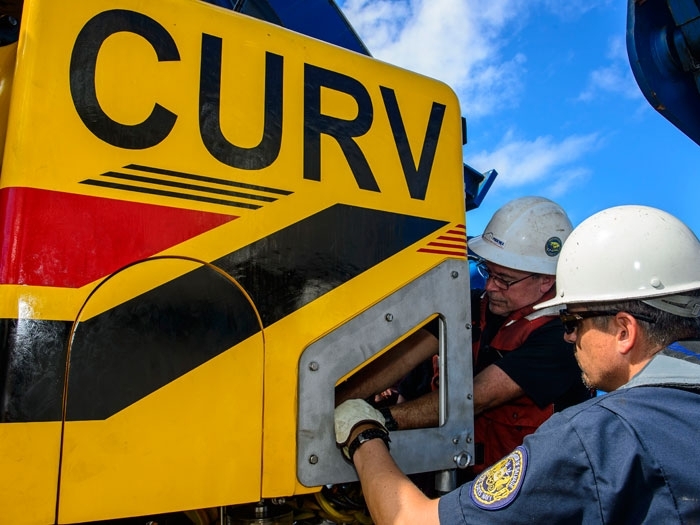 "Over the years we've completed many investigations without the aid of recorders and other investigative tools," said NTSB Chairman Christopher A. Hart. "While it is disappointing that the voyage data recorder was not located, we are hopeful that we'll be able to determine the probable cause of this tragedy and the factors that may have contributed to it."

The 790-foot U.S.-flag ship operated by TOTE Maritime Puerto Rico went missing on Oct. 1 during Hurricane Joaquin and was located on Oct. 31 in about 15,000 feet of water in the vicinity of its last known position near Crooked Island, Bahamas.

In early October, the NTSB contracted with the U.S. Navy to locate the missing ship, document the wreckage and debris field, and if possible, recover the voyage data recorder.

Sonar equipment towed from USNS Apache detected what was believed to be El Faro on Oct. 31. The finding was confirmed on Nov. 1 when investigators were able to view video of the vessel obtained from CURV-21, a remotely operated vehicle capable of deep sea search activity.

Video revealed that the navigation bridge structure and the deck below it had separated from the ship. The missing structure included the mast and its base where the voyage data recorder was mounted.

After five more days of searching with CURV-21, it was determined that the VDR could not be located. The search and video documentation efforts of El Faro were completed on Nov. 15.

NOVEMBER 16, 2015 — The National Transportation Safety Board said today that the video documentation of the cargo ship El Faro and the associated debris field has been completed but the vessel’s voyage data recorder (VDR) was not located. No further search missions are planned.