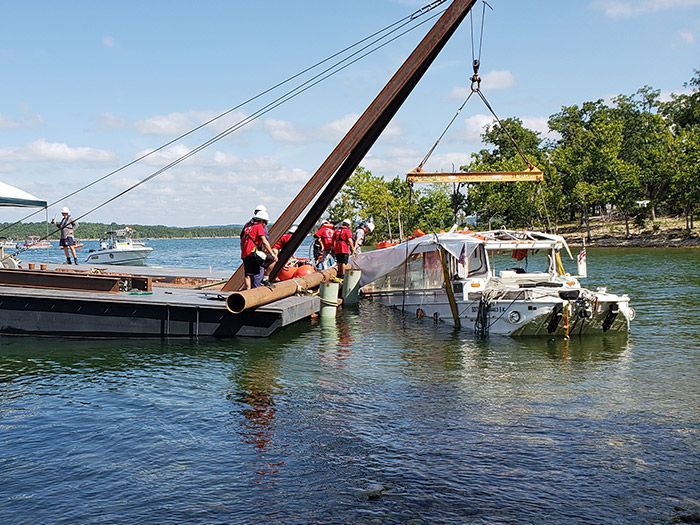 AUGUST 1, 2018 — Legal problems are mounting for the companies involved with the Ride the Ducks Branson operation

On Monday, the Kansas Star reported that the Missouri Attorney General’s office had confirmed that it has opened a criminal investigation following the July 19 sinking of the duck boat Stretch Duck 07 and the deaths of 17 people.

That news came after the filing of the first two lawsuits in the case, these — one filed in U.S. District Court, the other in a Missouri state Circuit Court —have since been followed by at least one more.

The filings in these cases make disturbing reading, the more so as they seem to indicate that the duck boat industry has seemed to blindly ignore the multiple recommendations made to enhance the safety of the vessels made by the NTSB after a 1999 tragedy that cost 13 lives.

In a case filed in U.S. District Court, Kansas City, MO, suit was brought on behalf of “Uncle Ray” Coleman, 76, and his great-nephew, two-year-old Maxwell Coleman Ly, two of nine members of the same family who drowned in the tragedy.

Attorneys for the plaintiffs, in announcing the start of litigation, said they would be filing additional related lawsuits in the near future. The attorneys say that defendants include the present and immediate past duck boat tour operators that collectively run the largest duck boat fleet in the country.

The attorneys, in noting a $100 million damages claim as part of the filing, said ultimately that is an issue for a jury to decide. Attorney Robert J. Mongeluzzi stated that no amount would adequately compensate those impacted by the “horrific and irrevocable loss of life,” and that he “ultimately hopes the litigation permanently ends the use of duck boats.” thus sparing others the pain and heartache they are experiencing.

The trial lawyers say they will also be filing – as administrative-related documents are processed – additional law suits on behalf of other victims in the near future.

Among other things, the complaint asserts that “as Stretch Duck 07 sank, the canopy of the duck boat entrapped passengers and dragged them to the bottom of the lake with the duck boat.”

The complaint says that defendant Ripley Entertainment, Inc. “operated Stretch Duck 07 and recklessly risked the lives of its passengers for purely financial reasons” and that “despite being aware of impending severe weather conditions, Ripley intentionally decided to take the duck boat out onto Table Rock Lake instead of cancelling the tour and refunding the patrons’ money.”

The complaint says that the tragedy was the “predictable and predicted result of decades of unacceptable, greed-driven, and willful ignorance of safety by the duck boat industry in the face of specific and repeated warnings that their duck boats are death traps for passengers and pose grave danger to the public on water and on land.”

The complaint further asserts that defendants had been told that design flaws in the duck boats made them more susceptible to sinking.

“On numerous occasions before July 19, 2018, defendants were warned that the canopies used on their duck boats were dangerous and created death traps for passengers in the event of emergency.

“For two decades, defendants had been repeatedly told to change the design of their duck boats to make them safer, but they entirely ignored these warnings.”

According to the complaint, in August 2017, prior to purchasing the Branson operation, Ripley hired an inspector, Steven Paul, to inspect the Branson Duck Boats.

“Defendants were told by Steven Paul that their duck boats’ engines and the bilge pumps that remove water from their hulls might fail in bad weather due to the improper placement of the boats’ exhaust system.

“Defendants did nothing in response to these warnings.”

Read the complaint in this case HERE

On Monday, the three adult daughters of William Bright, 65, and Janice Bright, 63, from Higginsville, MO, both of whom died in the duck boat sinking, filed a lawsuit under Missouri state law in Taney County Circuit Court, making many of the same allegations as made in the case filed in U.S. District Court.

Named as defendants in this case are Ride the Ducks International LLC, Ripley Entertainment, Inc. and both Kenneth McKee, the captain of Stretch Duck 07, and Robert Williams, the duck boat’s co-captain who was among those who died in the sinking,

In their plea, the plaintiffs say, among other things, that the DUKW vessels used by duck boat operators were designed in 1942 to make beach landings and then to proceed onshore to provide limited troop transportation away from the beachhead. They were built with a limited life expectancy of only a few months due to the accelerated production schedule and simplified hull construction.

The DUKW’s military configuration was based on a 2 ½ ton 6×6 truck chassis with an overall hull length of 31 feet. A little over 21,000 DUKW’s were produced and after the war, many units were sold as “surplus”.

In approximately 1996, Robert McDowell, the previous owner of Ride the Ducks International, began converting the military DUKW’s into what he termed “Stretch Ducks”. Most of the work was done through Amphibious Vehicle Manufacturing, a Branson, MO company that was merged into RTDI.

The complaint asserts that Robert McDowell, despite having no engineering, design or other mechanical training, designed Stretch Duck 07.

“In a previous deposition,” asserts the complaint, “Mr. McDowell admits that he simply got some ideas by consulting with a football coach, someone at the auto parts store and someone at a U-Haul store.”

Read the plea in this case HERE