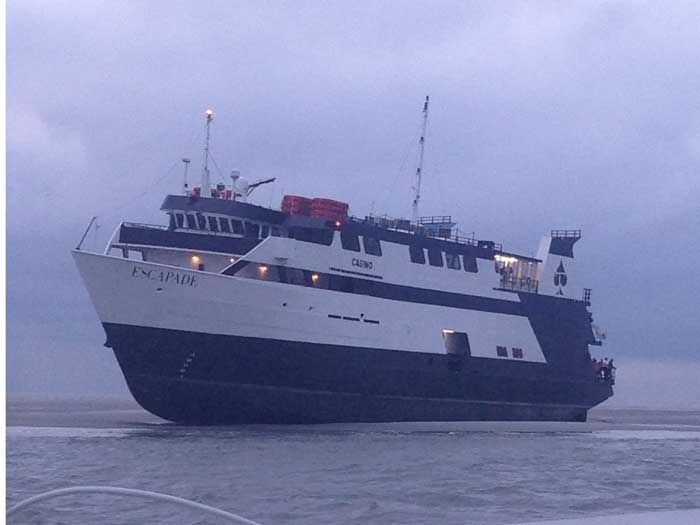 JULY 18, 2014 — The Coast Guard has safely transferred 114 people off a casino boat that ran aground and became stranded about two miles northeast of Tybee Island, GA, Wednesday.

No pollution or injuries have been reported.

The Escapade, a 174-foot vessel operated by Tradewinds Casino Cruise, Savannah, GA, was carrying 96 passengers and 31 staff and crewmembers when it grounded on a rocky bottom.

The cause of the grounding is under Coast Guard investigation.

After five unsuccessful attempts by a commercial salvage company to tow the Escapade with all the people still aboard, a decision was made to transfer the passengers and non-essential staff and crew members to shore.

Coast Guard members aboard three 25-foot response boats and one 45-foot response boat from Station Tybee Island worked together to ferry 114 people from the casino boat to the Coast Guard Cutters Maria Bray and Tarpon, which are larger vessels capable of carrying more people than the smaller response boats. Once all 114 people were aboard the cutters, both departed the area and took the people to Coast Guard Station Tybee Island, where EMTs were standing by and vans were available to take them to their vehicles at the Escapade’s homeport in Savannah.

Two Coast Guard helicopters from Air Station Savannah, Georgia, hoisted four passengers who were incapable of or uncomfortable climbing down the casino ship’s Jacob’s ladder to board the Coast Guard response boats.

“Members of all Coast Guard Sectors are well trained and prepared for mass rescue operations, but our hopes are not to have to exercise those plans,” said Capt. Ric Rodriguez, command of Coast Guard Sector Charleston, South Carolina, which coordinated and oversaw the response. “Today’s response, which included support from Savannah-Chatham Marine Patrol, was well executed despite difficult circumstances. The safe evacuation of all passengers and crew aboard was our primary concern. I could not be more proud of the way our Coast Guard men and women responded and performed today.”

Seven Escapade crew members remained aboard the ship to monitor it until a commercial salvage company could again attempt to to tow the vessel.