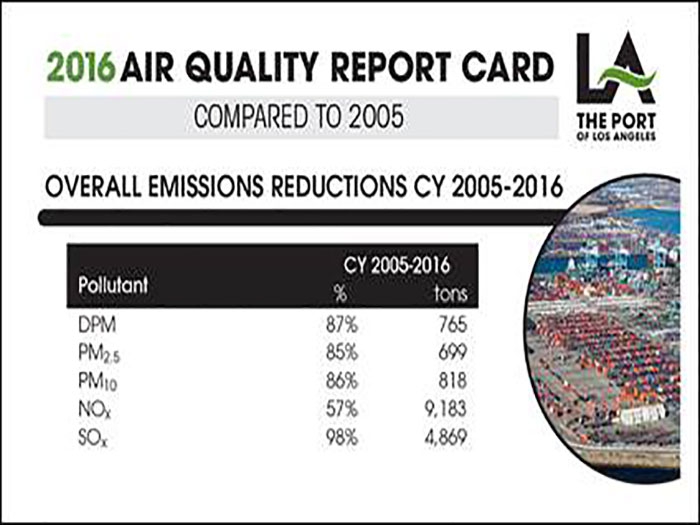 AUGUST 21, 2017 — The Port of Los Angeles achieved record clean air gains while moving more cargo than ever, according to its 2016 Inventory of Air Emissions. The report also shows the port surpassed its 2020 goal for reducing the health risk of emissions from port-related activity.

“Our ports are the engines that power our economy, and they can also be the forces that drive our region toward a greener, healthier future,” said Los Angeles Mayor Eric Garcetti. “These outstanding results are a powerful demonstration of how we can continue making our air cleaner even as we move record amounts of cargo at the port — and I’ll keep pushing for continued progress toward the goal of zero emissions goods movement at the ports.”

“The 2016 report validates the benefit of our clean air strategies in combination with improved operational efficiency,” said Port of Los Angeles Executive Director Gene Seroka. “We’re proud of the extraordinary progress we’ve made reducing emissions since 2006, and we’re determined to do more in the years ahead.”

In the same period, the port moved more than 8.85 million twenty-foot equivalent units (TEUs), maintaining its ranking as the Western Hemisphere’s No. 1 container seaport and surpassing its earlier record of nearly 8.47 million TEUs set in 2006. The 2016 peak is an 18 percent increase in cargo since the 2005 baseline inventory.

A closer look at the numbers reveals the extent to which 2016 was a banner year for the port’s air quality improvement gains. From 2015 to 2016 alone, pollution is down 13 percent for DPM, 10 percent for NOx and 14 percent for SOx.

The latest findings are based on data collected during calendar year 2016 and reviewed by regional, state and federal air regulatory agencies. The inventory is a detailed report card documenting the impact of all strategies for curbing every source of port-related emissions: ships, locomotives, trucks, cargo handling equipment and harbor craft.

Operational efficiencies include a chassis pool serving the entire complex, advanced planning for the largest ship calls, and additional measures that vessel operators, terminals, railroads, trucking companies and other port partners collaborated on and adopted to prevent the congestion that slowed cargo during late 2014 and early 2015.

Substantial progress in reducing emissions from ships played a key role in the 2016 results. Factors include the ongoing trend of fewer vessel calls due to bigger ships carrying more cargo, fleet compliance with California’s shore power regulations for an entire year without congestion, and an increased use of alternative emissions capture technology when plugging into shore-side electricity is unavailable.