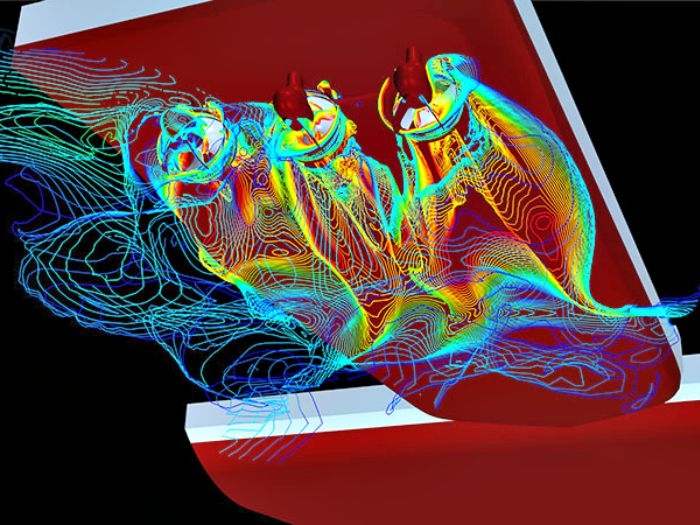 AUGUST 11, 2015—Some veteran Mississippi push boats and barges have been transported to South America for second careers. However, conditions on a great river like the Paraguay-Paraná are different. It has sharp bends, shallow stretches, and includes remote reaches totally lacking in infrastructure. Building on extensive experience designing for the shallow rivers of Canada’s frontier northland, Robert Allan Ltd., naval architects from Vancouver, BC, Canada, have taken on the challenge of creating a new generation of specialized tug and barge systems to suit these demanding environments.

A waterway logistics corporation, Hidrovias do Brasil, was the firm’s first South American client to commission new purpose-built shallow draft vessels. These would serve a major mining company’s plans to transport iron ore from Brazil down the Paraguay-Paraná to Uruguay in a 24 hour-a-day, year round operation. The sprawling watercourse flows south through the centre of the continent, connecting Brazil, Bolivia, Paraguay and Argentina. The transit voyage for the convoy covers 2,500 kilometers from Corumba to Nueva Palmira.

According to Robert Allan Ltd. President Michael Fitzpatrick, “The shallower it gets, the more challenging.” Accurate design is even more critical than normal, and the firm was challenged to develop vessels capable of operating throughout the variable river system, especially in seasons of low water levels. Project Engineer Erik Johnston adds, “fuel consumption was calculated with simulations to match the load profile, using data from the river; less water under the keel means more fuel consumption.”

After closely studying the region and client requirements, the firm developed a powerful 46.5 meter by 16.5 meter push boat design with a full load draft of 2.5 meters or at a reduced draft of 2.1 meters for low water conditions. A double hull mitigates the risk of a fuel spill resulting from any grounding or collision damage. Each pusher tug can handle 16 barges in a 4 by 4 array, creating a convoy spanning 290 meters by 60 meters and carrying 45,500 tonnes of ore at the current river draft limit. The barges can carry up to 50,000 tonnes per convoy at a 3.96 meters draft. A critical requirement for the project approval was the Brazilian Authority’s performance stipulation for a crash stop: fully loaded, running downriver from full speed in 2.5 convoy lengths. The Authority made the crash stop an important safety measure on this river with varying channel width and depth, limited sightlines around bends and increasing vessel traffic. The Robert Allan Ltd. team examined many propulsion alternatives, and finally developed the triple azimuthing drive tug design to satisfy this demanding requirement. This drive arrangement allows immediate full reverse thrust and outstanding manoeuvrability. This backing performance was verified in advance through an extensive series of computational fluid dynamics (CFD) analyses (Figure 1, CFD analysis of braking performance, top of page).

Eight of these push boats, designated as the RApide 4600–Z3 Class, were constructed by Uzmar Shipyard in Turkey. Each tug has accommodation for 18 crew and a range of over 5,000 km (one full round trip) at the deep draft of 2.5 meters, or a one-way trip at the 2.1 m draft. The bridge offers an unobstructed view of the tow ahead and all working decks, and there is plenty of deck space for handling lines.

These are the most powerful triple Z-drive shallow draft push boats built to date. The propulsion system is diesel-electric, with three independent Wärtsilä 9L20 medium-speed diesel gensets each developing 1,710 ekW. AC current motors from ABB power Schottel SRP 1215 azimuthing drives with custom-designed nozzles that reduce draft and heavy-duty drive components to withstand impacts with river debris. This combination produces a Bollard Pull of 69 tonnes ahead and 63 tonnes astern. The engines are capable of operating on MGO, but normally run on less expensive HFO. Diesel-electric propulsion provided advantages with flexibility in positioning the engines and drives to ensure best operating trim in the shallow waters.

There are 128 open hopper barges, each measuring 61.0 meters by 15.0 meters also designed by Robert Allan Ltd., were constructed at Shanghai Zhenhua Heavy Industry Co. Ltd. (ZPMC) in China. Half the barges have single raked ends, while the remainder have no rakes. The barge rakes were also optimized to improve the crash stop capability as discussed above. Bart Stockdill is the project engineer leading the CFD team. He notes, “We were able to compare our own hopper barge design with the ones designed by a local shipyard for this project. Ours had 7% less resistance representing a very significant fuel savings.” Robert Allan Ltd. also designed an 1,800 tonne floating drydock to service the new fleet, which was also built by ZPMC, and is now in operation at Asuncion, Paraguay.

The barges were delivered 32 at a time by heavy lift ship (Figure 2, Barge delivery) to Montevideo, Uruguay. Sixteen additional hopper barges are being constructed at CIE shipyard in Paraguay.

The completed push boats and barges are now at work on the Paraguay-Paraná waterway, (Figure 3, Tug and barge flotilla on the Rio Parana, below) attaining all calculated speeds and fuel consumption. Free running speed for the push boats is 13.2 knots. Operations have confirmed the firm’s prediction that including nozzles would save 7% to 8% on fuel. According to Fitzpatrick, in spite of this being a new design tug-barge system, “There were no real surprises on the project. The force of turning the convoy initially broke some of the wires connecting the barges. The Owner replaced them with synthetic lines that have more stretch capacity, a higher breaking strength and are easier to handle.”

Buoyed by the success of this major project, Robert Allan Ltd. is currently busy designing other tug-barge systems for South American clients, including Hidrovias do Brasil, and a number of other companies transporting various commodities along the Paraguay-Paraná and Amazon River systems. Push boats designed for the Amazon are shorter, and deeper than those on the Paraná. Executive Chairman of the Board Robert G. Allan, grandson of the firm’s founder, remarks, “These shallow-draft projects are very unique; each river system and each client needs a customized design solution: successful outcomes require a proven designer rather than a so-called “proven design.”

A key factor in the success of Robert Allan Ltd. in this market is the ability to accurately predict vessel performance using CFD. A significant recent investment in a supercomputing cluster and specialized staff allows the company to quickly and effectively model alternative hull designs at full scale to establish optimal design configurations. As Fitzpatrick points out, “CFD allows us to assess a whole system before building anything. Corporate clients appreciate our ability to compare different scenarios in detail.” While CFD has not completely replaced model tank testing at the firm, its use has expanded rapidly and enables the evaluation of design details to save fuel and optimize performance. These advanced design techniques have implications for the performance of all manner of workboats, everywhere.