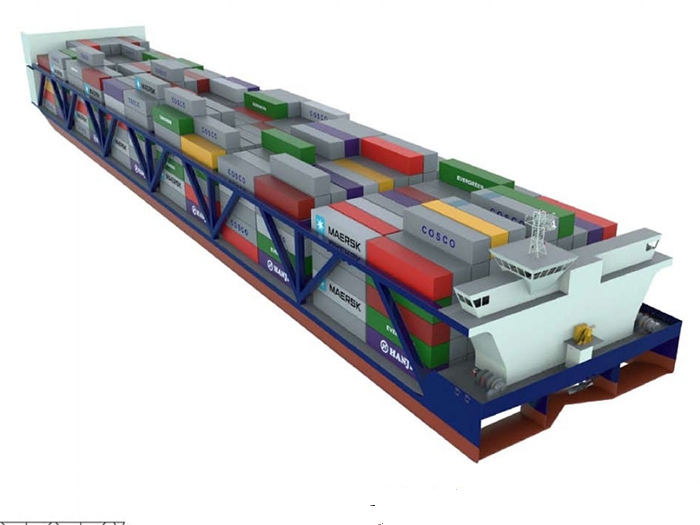 A project that aims to develop a multimodal container terminal in Plaquemines Parish, La., has taken another step forward. The proposed 1,000-acre terminal, with 8,200 feet of Mississippi River frontage 50 miles from the Gulf of Mexico, would be able to handle 22,000 TEU containerships. Once operational, U.S. Midwest shippers would be able to ship cargoes to it using 2,375-TEU and 1,700-TEU LNG-fueled river container vessels featuring a patented no-wake bow and exoskeleton structures.

Plaquemines Port Harbor and Terminal District (PPHTD) reports that it has now signed a letter of intent (LOI) on development of the terminal with several potential partners. The signing of the LOI marks the start of a six-month due diligence period during in which the parties will conduct multiple studies prior to making a final investment decision. If that decision is positive, phase one of construction is expected to take as little as two years and will deliver the capability to handle 22,000-TEU class vessels with the ability to expand capacity if needed. A new LNG terminal proposed adjacent to the facility opens the door for it to serve large LNG-powered containerships.

In addition to Plaquemines Port, signatories to the LOI include American Patriot Holdings , developer of the innovative LNG-fueled river container vessels, and Louisiana 23 Development Company LLC (Devco), led by Chris Fetters, which was selected as the exclusive private development partner for Plaquemines Port in December 2019. Devco will provide financial solutions and funding alternatives to support the container terminal development. The company will be responsible for funding and constructing critical infrastructure including rail, warehousing and utility services.

The innovative and patented design for the river container vessels, developed by Naviform Consulting and Research Ltd. of Canada, is owned by American Patriot Holdings LLC (APH). They would be operated by American Patriot Container Transport LLC. The design includes two U.S. Patents, with additional patents pending in Europe and Asia. The first patent includes the Exoskeleton Hull Structure, which significantly reduces the lightship weight allowing for maximum container payload. The second patent includes the Minimal Wake Bow Structure which allows the vessel to transit upriver, against a 5 mph current, at speeds of 13 mph with essentially no wake. APH has entered into an exclusive licensing agreement with Naviform for use and sub-licensing of these patents, which should have worldwide appeal.

Plaquemines Port Executive Director Sandy Sanders said, “This will be the Gateway Port on the Gulf Coast capable of taking full advantage of the distribution network on the Mississippi and tributary rivers while reducing road congestion in the region and accommodating LNG-powered vessels to enhance environmental sustainability.”

Trudy Newberry, Vice-Chairman of the Plaquemines Port, said, “We are extremely pleased and supportive that the port has attracted several world-class partners to fully explore the development of a modern and efficient terminal in Plaquemines.”

APH Principals Joe Gehegan and Bob McCormack say that their LNG-fueled vessels will provide a vertically integrated transportation system resulting in significant shipper transportation savings and reliability to the Midwest.

American Patriot Container Transport CEO Sal Litrico said, “We are ready to get this project underway to bring improved global competitiveness to our customers.”