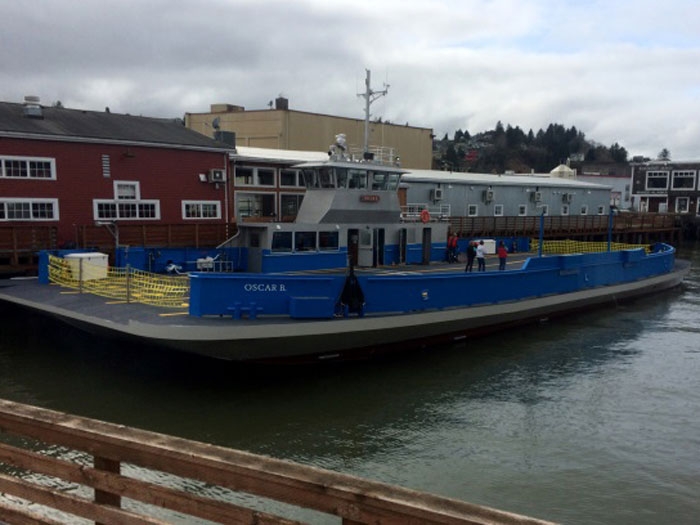 Designed by Seattle’s Elliott Bay Design Group (EBDG) the steel-hulled, aluminum superstructured vessel has been built for Wahkiakum County, Washington State as a replacement for the ferry Wahkiakum and is named after the late Oscar Bergseng who skippered the Wahkiakum for 17 years.

The vessel has completed sea trials left Nichols Whidbey Island shipyard. and will soon enter service between ferry terminals in Cathlamet, WA, and Westport, OR.

The new M/V Oscar B is nearly twice the size of its predecessor, which held 12 passenger cars.

Designed to operate at 8 knots, the Oscar B is powered by two state-of-the-art Cummins QLS diesels, each delivering 285 HP @ 1,800 RPM and coupled to ZF Marine reversing reduction gears with two fixed‐pitched propellers.

In addition to its expanded vehicle capacity, the Oscar B has hydraulic steering instead of cable and chain steering, up-to-date electronics, a passenger lounge and ADA-accessible restrooms. The vessel meets current U.S. Coast Guard requirements.

“While we don’t know what the future holds, with the expertise of Elliott Bay Design Group, and great craftsmanship of Nichols Brothers Boat Builders/Ice Floe, we have helped secure the possibilities,” said Pete Ringen, Director and County Engineer for Wahkiakum County Public Works.

“We’re proud to play a role in helping provide this vital transportation link for the communities of Cathlamet and Westport,” said EBDG Project Manager, Curt Leffers.