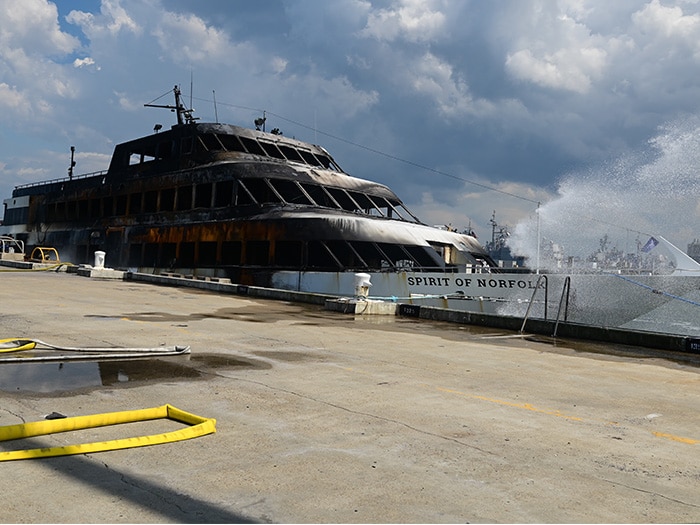 The Spirit of Norfolk cruise yacht was reported a “still smoldering” this morning, two days after an incident that began when the City of Norfolk, Va., received a 911 call at 12.06 p.m., June 7, that the vessel was on fire, with over 100 people onboard, near Pier 3 at the Norfolk Naval Base.

According to local media reports, fire and military emergency crews were dispatched in response. The 106 passengers onboard, mostly local elementary school children, were evacuated onto the smaller tour boat Victory Rover, which brought them back to dock at Town Point Park.

Two crew members remained on the ship until it was pushed by tugs to Pier 4 at the naval base, where firefighting efforts continued.

All 108 passengers and crew members have been accounted for. No injuries were reported.

Spirit of Norfolk is managed by City Cruises Norfolk, whose parent company is the Hornblower Group’s City Experiences. The 187-foot ship can accommodate 480 passengers for dining or 570 for other events, such as cocktail parties.

The City of Norfolk, Port of Virginia, and NOAA are supporting the unified command.

Today the City of Norfolk released a statement saying that the unified command and supporting agencies had continued their efforts to extinguish the fire and salvage the vessel, Wednesday evening.

In a letter this morning the Virginia Department of Environmental Quality said “firefighting efforts continued well into Thursday morning. The vessel is currently smoldering and crews remain on site.”

Crews put a dewatering pump aboard the vessel to begin removing the water from the firefighting efforts. The water is currently being pumped into tanks, however a barge was scheduled to arrive today (Thursday) to increase the storage capacity for the water. All contaminated water is being handled in accordance with clean environmental standards.

The cause of the fire is currently under investigation by the U.S. Coast Guard and the National Transportation Safety Board.