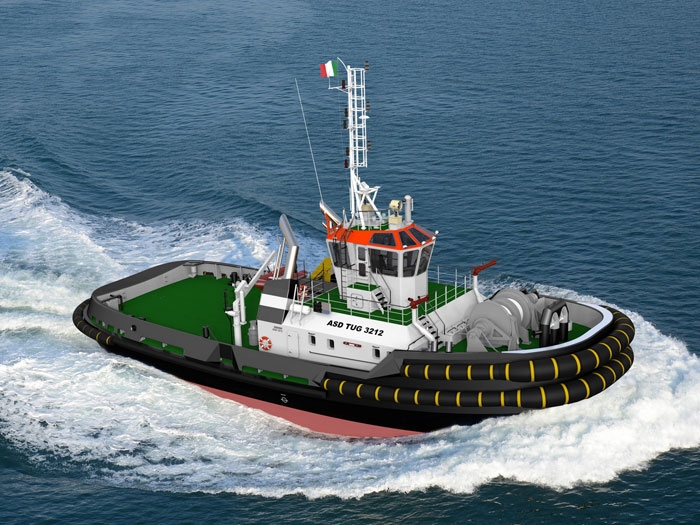 JULY 31, 2015 — Italian tug owner Fratelli Neri S.p.A has ordered its first newbuild Damen tug. The ASD 3212 will be the first ASD tug in the Mediterranean region with a Damen Render Recovery Escort winch.

In addition to the newbuild ASD 3212, the company has acquired two second-hand Stan tugs 2608 from Damen Trading. The Fratelli Neri fleet also includes the LNG Express, a Damen Stan Tender 1905 built from a stock hull in 2010 and used as a crew boat at the floating LNG terminal near Livorno, Italy.

The ASD 3212 design includes a completely revised hull form and a higher bow, resulting in better speed and a dry foredeck. With a bollard pull of over 80 tonnes, and excellent seakeeping and maneuverability, the ASD 3212 can cope with higher wave heights when assisting large tankers and container vessels in open and challenging waters.Its hydraulically powered, double drum winch has a maximum brake holding load of 200 tonnes.

Staying connected to the assisted ship is vital for tug operation and very high peak loads can lead to the towline breaking.

“The Render Recovery winch has proven it is far more reliable and faster in demanding sea escort operations in recovering a line than a normal winch is,” says Damen Shipyards Sales Manager North, West and South Europe, Andrea Trevisan.

“We are proud to add this Damen ASD 3212 tug to our fleet and quite confident that our Masters will enjoy using it,” says Fratelli Neri Chartering Manager, Corrado Neri. “The tug will be used for port towage in the Mediterranean, although its versatility and performance do not preclude our using it elsewhere.”

”We are extremely delighted that this prestigious Italian, family-owned company has purchased its first new Damen tug. The tug will be delivered by December 2015. It was on stock and customized for the Italian flag including fire-fighting – water spray – notation as well as oil recovery notation,” says Mr. Trevisan.