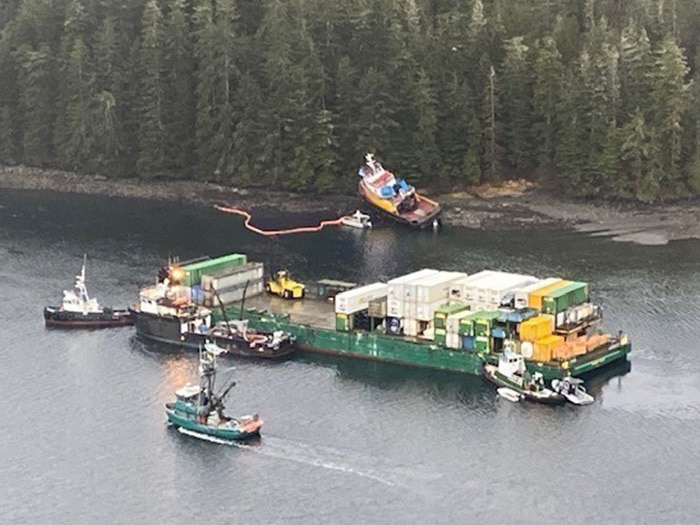 The Coast Guard, Alaska Department of Environmental Conservation (ADEC), and Western Towboat have established a unified command in response to a tug grounding in Alaska’s Neva Strait, with a subsequent spill of diesel fuel.

Watchstanders in the Sector Juneau command center received a radio call at 2:55 a.m. Monday from the tug Western Mariner stating that while towing Chichagof Provider, a 286-foot containerized barge, in Neva Strait, the barge collided with the tug causing it to run hard aground. The collision caused a rupture to one of the tug’s fuel tanks.

According to ADEC, “a temporary steering failure onboard the Western Mariner caused the barge to collide with the tug. The collision pushed the tug onto the beach, resulting n the release of diesel.”

No injuries have been reported and all four crew members were safely transferred from the Western Mariner, a 1983-built 83-foot inspected tug owned by Western Towboat, to a nearby vessel. All fuel manifolds on board the tug have been secured to isolate the ruptured tank, and fuel offload efforts have commenced.

A sheen was observed around the tug, and containment measures have been deployed to reduce the spread of oil. The tug owner has contracted Hanson Maritime, SEAPRO, and Global Diving & Salvage to respond.

The Coast Guard says that multiple vessels, including tugs Banner and Salvation, and fishing vessel Nushagak Spirit, are on scene tending the barge, which has now been anchored in Neva Strait with no impact to vessel traffic.

The Coast Guard has deployed responders to oversee response operations. Natural resource agencies are assessing potential environmental impacts, and the Coast Guard is consulting with federally recognized tribes in the area.