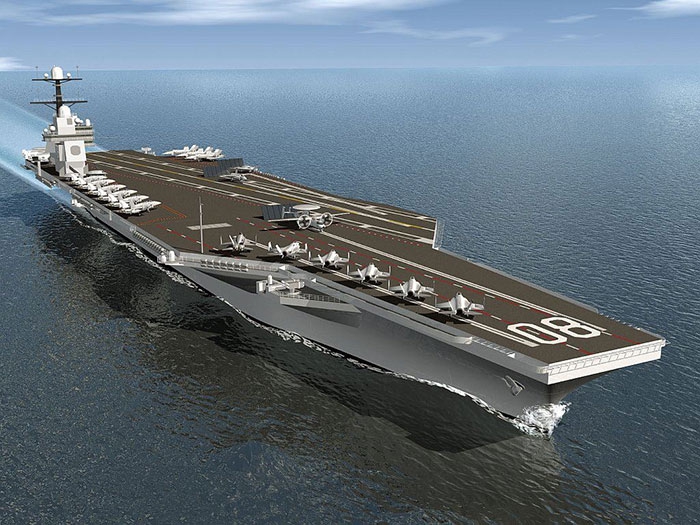 JANUARY 3, 2019 — The Navy is set to award Huntington Ingalls Industries’ Newport News Shipbuilding division a block buy contract for two aircraft carriers. On December 31, the Pentagon reportedly sent a certification letter to Congress that outlined the contracting strategy and how much time and money it would allow the Navy to save on the carriers, CVN 80 and CVN 81.

Confirmation came from U.S. Senator Tim Kaine, a member of the Senate Armed Services Committee, who released the following statement: “I’m thrilled the Navy has decided to pursue a block buy for aircraft carriers, something I’ve been advocating to save billions in taxpayer dollars and offer more certainty to the Hampton Roads defense community. This smart move will save taxpayer dollars and help ensure the shipyards can maintain a skilled workforce to get the job done. Newport News builds the finest carriers in the world, and I know they are ready to handle this increase in work as we make progress toward the Navy’s goal of a 355-ship fleet.”

Yesterday, Congressman Rob Wittman (VA-01), then Chairman of the House Seapower and Projection Forces Subcommittee, said that the “dual buy will not only save the taxpayers $4.0 billion, it provides important certainty to our defense industrial base that build and maintain these ships. For Virginia, it means thousands of reliable jobs for the next decade and beyond. I am proud to have led this effort and look forward to its success.”

Congressman Wittman’s amendment to the Defense Appropriations Act stripped the limiting language of “CVN-80” from the text, thus allowing funding for both CVN 80 and CVN 81. This amendment was adopted by voice vote.

What will the two ship contract be worth? Stay tuned for the formal award of the contract, which could come before the end of the month.