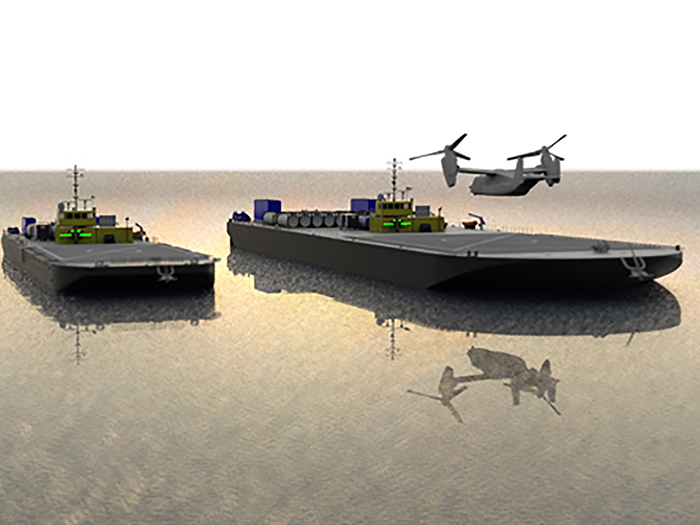 In defense speak, the barges will then be “Forward Arming and Refueling Point (FARP) units for an Amphibious Maritime Projection Platform (AMPP).”

Under the agreement, Sea Machines will engineer, build and demonstrate ready-to-deploy system kits that will include Sea Machines’ SM300 autonomous-command and control systems, barge propulsion, sensing, positioning, communications and refueling equipment, as well as items required for global deployment. Each modular kit will meet U.S. Navy criteria and will be in compliance with classifications and regulations from the DOD’s aviation bodies.

Foss will provide naval architecture, support engineering and operations management to outfit a remotely commanded deck barge to land helicopters and host a scaled fueling station for aircraft, surface vessels and shore replenishment. Using the SM300, shoreside operators will have remote situational awareness and will be able to demonstrate the capabilities of remote command and control of the vessel, its operating systems and flight deck.

Sea Machines is the prime contractor for the multi-year contract and is working closely alongside Foss Maritime and other industry leaders, including shipbuilder Huntington Ingalls, and commercial and military, vertical-lift aircraft specialist Bell Flight.

“The AMPP autonomous replenishment systems will solve critical logistics challenges of expeditionary missions. We are pleased to enable this innovative capability, which will increase the effectiveness and flexibility for the U.S. military,” said Sea Machines’ Phil Bourque, director, sales. “With Sea Machines systems already working off the waters of four continents, this project is well suited for us and one that we look forward to delivering on for the U.S. Government.”

“Foss is excited about this new opportunity with Sea Machines. This contract has led to discussions with Sea Machines in a number of other areas where their expertise can help Foss, including bringing more technology to our tug fleet. What they are doing in automation is very interesting and that technology could help our mariners and our vessels safety,” said Foss Chief Operating Officer Will Roberts.