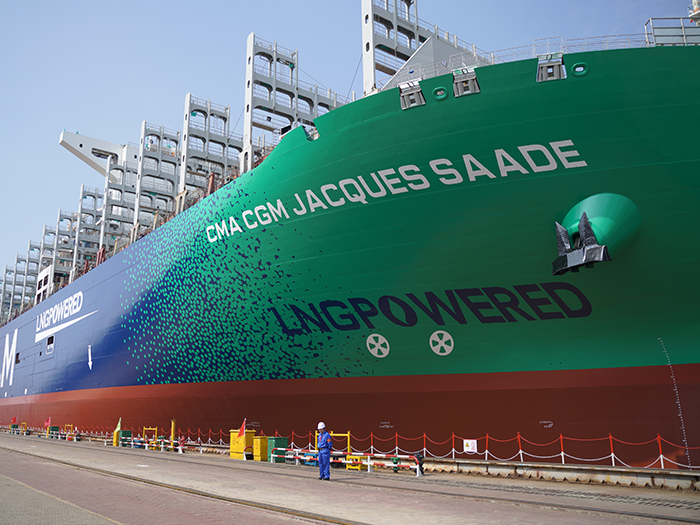 The name honors Jacques R. Saadé, the group’s founder, a towering presence and pioneer in the container shipping industry, who passed away in June 2018.

Measuring 400 meters long, 61 meters wide, 78 meters tall, and with a 16-meter draft, the ship’s LNG-fueled propulsion is based on a 12X92DF WinGD engine developing 63,840 kW and driving a 10 meter diameter propeller. But that’s only the start of the story. The innovations literally stretch from stem to stern. At the front, the bulb has been completely integrated to the vessel’s profile: the bow is straight and tapered, a first for a vessel of this size. At the stern, the propeller and the rudder have been redesigned for optimized performance and the propeller is equipped with a Becker Twisted Fin system to optimizing water flow and significantly reduce energy consumption.

A key part of the vessel is its GTT-designed 18,600-cubic-meter LNG tank and its associated systems. Its huge capacity allows full round trips between Asia and Europe. Construction of the tank required the assembly of 1,649 stainless steel panels. The tank insulation operation required a high level of technical expertise and lasted approximately nine months. It consists of manufacturing a thermal cocoon that allows the natural gas to be maintained in a liquid state, i.e. at -161°C. Two layers of insulation and a second membrane envelop the tank and are equipped with sensors to ensure that the LNG storage conditions remain optimal and meet all safety requirements.

The process of gasification and pressurization of the gas is complex as it must be adjusted in accordance with the engines’ consumption, which depends on the speed of the vessel and the electricity consumption on board. The vessel’s crew of 26 includes a gas management officer.

CMA CGM says that the digital applications onboard the CMA CGM Jaques Saadé are taking the industry int the shipping 4.0 era.

Augmented reality screens on the bridge providing real-time information to officers such as the vessel’s rate of turn, distance from the quay and even transverse speeds while a tactical screen provides for a better view of the charts and dynamic navigation briefings. A “path prediction” system, enables the location of the ship to be predicted with a high degree of accuracy within the next three minutes, taking into account the current rate of turn and speed, as well as helm and speed orders. This facilitates docking maneuvers and allows the master to better understand the ship’s movements. Additionally, a “smart eye” projection system (a set of cameras) allows the vessel to be viewed through 360 degrees. Previously unheard of on a containership, it is a valuable tool for all port operations, says CMA CGM.

CMA CGM prides itself in pioneering France’s excellence in maritime technology, the CMA CGM Jacques Saadé and its eight sister ships (which will be named for French landmarks and institutions (Champs Elysées, Palais Royal, Louvre, Rivoli, Montmartre, Concorde, Trocadéro, and Sorbonne)  will be registered on the French International Register and classed with Bureau Veritas. CMA CGM has chosen Total as part of a major industrial partnership to supply the vessels with LNG.

French companies are also prominent among suppliers noted as making major contributions to the project. These include: