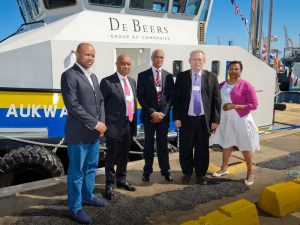 They are being built to carry out supply and support work for the De Beers Group’s offshore diamond mining activities and this first vessel was named Aukwatowa by Mrs Jenny Coltman, spouse of the Chairman of De Beers Group Services.

The Shoalbuster multi-purpose workboats are designed for inland and coastal waters. The 30 m 3009S has a bollard pull of 24.5 tonnes and is fitted with a crane with a lifting capacity of up to 1.7 tonnes, making it suitable for towage, buoy-laying, pushing and all-round support duties.

The two vessels ordered by Smit Amandla will operate out of Port Nolloth in South Africa’s Northern Cape. The shallow waters of the port make it accessible only to vessels with drafts of 2.8 m or less, so the Shoalbuster’s minimal draft was an important factor in Smit Amandla’s selection of the class.

The Aukwatowa was delivered on time and to budget. The trainees in Damen Cape Town’s highly-regarded Apprenticeship Program played a significant role in the project, with all of them getting the opportunity to exercise their newly-acquired skills as the vessel took shape.

The training program makes an appreciable contribution to creating jobs and raising skills levels both locally and in the South African marine industry. Since 2010, 63 young people, including 19 women, have benefited from the program. The shipyard’s efforts also contribute to the South African Government’s economic change initiative, known as Operation Phakisa, one element of which is the development of the country’s maritime sector.

Meanwhile, the build of the second Shoalbuster for Smit Amandla is proceeding smoothly and on schedule for delivery in 2016. Throughout both builds, the Cape Town shipyard has had the full cooperation of Damen Shipyards Hardinxveld in the Netherlands, the yard behind the development of this class. The Dutch yard has transferred the necessary technology and provided full support to ensure a top quality end result.

“We quickly established an excellent relationship with the Smit Amandla Marine project management team,” said Damen Cape Town’s project manager Craig Trethewey. “As a result the project has gone smoothly and is on schedule. We are really pleased with progress and look forward to seeing the second vessel in the water in February next year.”

Sam Montsi, Chairman of DSCT said: “We at Damen Shipyards Cape Town believe that the economic development of our country is a shared responsibility between Government and the private sector. We are therefore proud to be part of this co-operative effort with Smit Amandla and De Beers in having the two vessels built here in Cape Town. The vessels have been built within the budgets and times agreed. We look forward to more cooperation with Smit Amandla and other vessel operators in our country.”