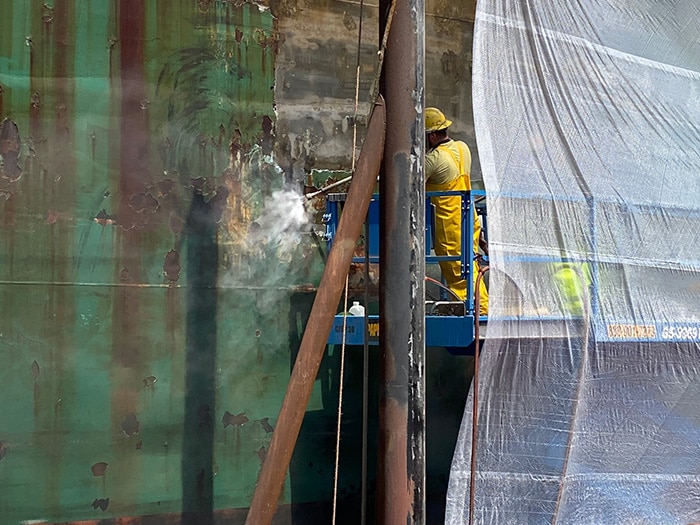 Both systems have already been put into operation by the shipyard, which is based in the Port of Everett, Wash., and offers drydocking and in-water service to marine industry along the west coast and surrounding regions.

The two new 40,000 psi UHP water blasting systems are capable of standard surface preparation and specialty applications. The systems allow ESR to deploy up to four water blasters simultaneously in a wide variety of applications including internal tank hydro blasting for cleaning and coatings removal.

The UHP water blasting system minimizes labor and waste stream produced by traditional grit blasting. ESR says the system is robot capable and reduces the need for man lifts and scaffolding to access and remove coatings from a ship’s hull and other structures. The robots have an additional benefit of reducing risk of personnel injury and fatigue.

Water blasting is an environmentally responsible process that produces no air pollution and creates significantly less waste disposal over solid grit blasting, says ESR. When water blasting is performed, the water is reclaimed through a separation system and leaves an inert and non-hazardous sludge behind for disposal. In contrast, sandblasting generates significant amounts of spent material consisting of paint-chips, silica, and potentially heavy metals.

A further benefit is that water blasting creates less noise compared to sandblasting and mechanical methods of coatings removal.

ESR will also use the UHP system outside the shipyard. It is now offering surface prep services for removal of unwanted or contaminated surface materials and will perform pipe cleaning, tank cleaning, and UHP surface preparation for marine and industrial customers.