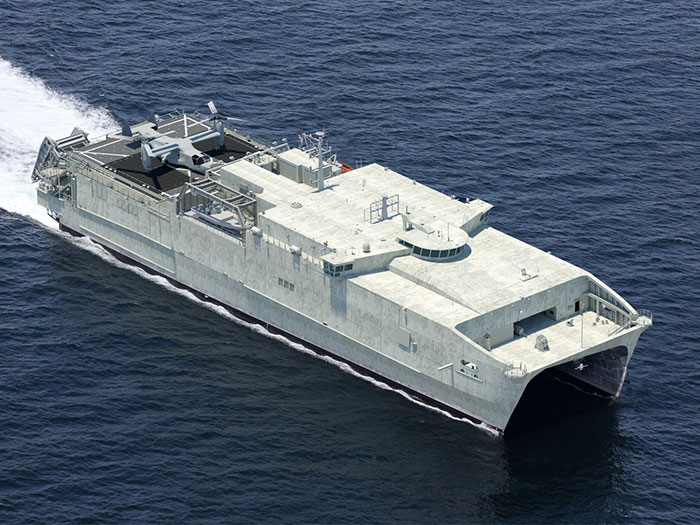 EPF 16 will be the third ship constructed in “Flight II” configuration, which has enhanced medical and aviation capabilities

Shipbuilder Austal USA has been awarded a $230.5 million contract for the detail design and construction of EPF 16, the U.S. Navy’s newest Expeditionary Fast Transport (EPF) ship.

EPF 16 will be the third ship constructed in “Flight II” configuration, which has enhanced medical and aviation capabilities. Austal USA has delivered twelve EPF ships to the Navy since 2012, on schedule and on budget, and is currently constructing EPFs 13, 14 and 15 at its shipyard in Mobile, Alabama.

EPF 13 is being developed as a prototype for autonomous operations, while EPF 14 and 15 were redesigned to deliver greater medical capability and capacity.

“Like the previously delivered EPFs, EPF 16 will benefit from the serial production of this program, resulting not only in a world-class ship but also providing assurance to the U.S. Navy that capability will be delivered on budget and on schedule,” said Austal USA President Rusty Murdaugh. “Our reputation for delivering quality is a direct reflection of the commitment and dedication of our talented shipbuilders and suppliers.”

The Flight II EPF ships will enhance the original capabilities of the Spearhead class through incorporation of reconfigurable spaces for operating rooms and postsurgical recovery efforts. Adding to their versatility, they have a flight deck that is capable of landing V-22 aircraft.

Construction efforts on EPF 16 are expected to commence later this year with delivery projected for 2025.

Paddy Gregg, CEO of Austal USA’s parent Austal Limited (ASX:ASB), said the contract for another EPF with enhanced medical capabilities highlighted both the success of the high-speed vessel platform and its flexibility to deliver various mission profiles.

“Austal’s Flight II EPF’s will further enhance the U.S. Navy’s capability and enable a fast response with expanded medical support facilities available for any mission or theatre of operation,” said Gregg. “We are delighted to see the EPF platform being deployed globally and we’re excited to begin production of another highly capable ship for the United States Navy.”