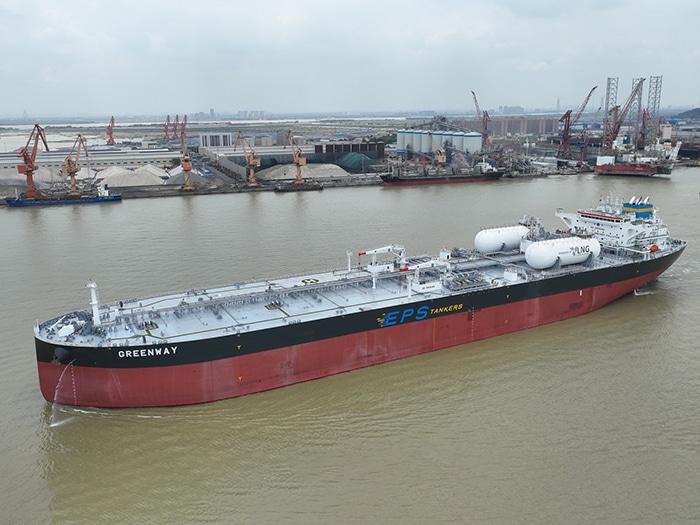 One of two significant ships delivered in the same week by GSI, Greenaway is the world's first LNG-fueled Suezmax tanker.

The second was the second methanol-fueled ship to be built in China, the Stena Pro Marine, whose sister ship the Stena Pro Patria was delivered earlier in June. Both 49,990 DWT IMOIIMeMAX dual-fuel mid-range (MR) tankers have been built for Proman Stena Bulk, a joint venture (JV) between methanol producer Proman and one of the world’s largest tanker shipping companies Stena Bulk.

Stena Pro Marine, like Stena Pro Patria, is expected to consume 12,500 tonnes of methanol anniually. The use of methanol onboard virtually eliminates local pollutants including SOx and particulate matter (PM), cuts NOx emissions by 60% and reduces CO2 emissions by up to 15% on a tank to wake basis versus conventional marine fuels.

A third sister is due to be delivered later this year and three more have been ordered to the same design.

“This is one of the best periods in GSI’s history,” said GSI vice president William Zhou. “I would like to pay tribute to all our team and suppliers here at GSI who have worked so hard with our clients Eastern Pacific and Stena Proman to deliver these magnificent ground-breaking vessels. The building of the ships sends a hugely positive message to the international maritime industry that GSI shipyard is at the cutting edge of building alternative fueled ships. These are some of the most innovative propulsion systems in the world and we are proud to be changing the shipping industry for the better, working with our customers, to help make shipping greener. It is our passion and we are driven to play our role in leading the future of green propulsion building some of the biggest ships in the world right here in China.”