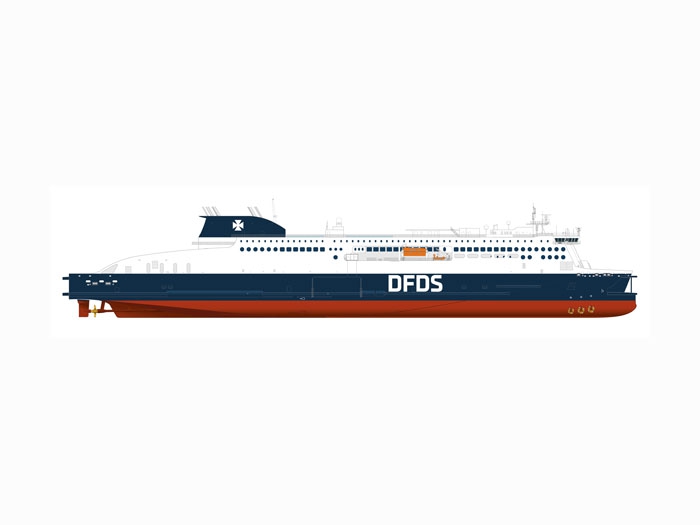 APRIL 26, 2018 — Stena RoRo, Goteborg, Sweden, reports that it has signed a long-term bareboat charter agreement with DFDS for a 1,000-passenger, 3,100 lane meter capacity newbuild RoPAX for operation on the English Channel.

StenaRoRo says it is the fifth Stena E-Flexer RoPax class vessel being built at Chinese shipyard AVIC International. Stena RoRo has a further three options on vessels for delivery from 2021 and onwards.

The newbuild RoPax will be operated by DFDS under a 10-year bareboat charter on the English Channel between Dover and Calais. DFDS will also have the option to buy the vessel after the charter.

Stena RoRo placed an order for four 214.5m x 27.8m RoPax vessels with the Chinese shipyard AVIC International with an option for a further four vessels. Designed by Stena in cooperation with Deltamarin Ltd., Turku, Finland, the RoPax vessels are expected to have about 175 cabins for 927 passengers, with a crew of 73. Delivery of the first four vessels is expected between late 2019 and late 2020.

According to a presentation by Westling, the Stena E-Flexer Class vessels (artist’s rendering at right) will be “prepared for scrubbers and catalytic converters” with a “GAS READY” class notation. The expected speed for the E-Flexer Class is 22 knots.

“The design of the ship will be worked out in close cooperation with DFDS. This deal is a good example of how we work being the largest and most well-known tonnage provider in the RoPax segment,” says Per Westling, Managing Director of Stena RoRo. “The order is part of DFDS’s renewal of its fleet and will replace one of the six ferries currently operating in the English Channel.”

Westling points out that Stena RoRo concluded a similar deal for one of the previous four newbuilds with the French ferry operator Brittany Ferries. That RoPax will fly the French flag and be delivered in the fall of 2020. The other three newbuilds will be operated by Stena Line on the Irish Sea.

“Since the ship has not yet been built, we have great opportunities to make sure that it is designed to give our guests the best possible experience with a completely new ship,” says Peder Gellert, Executive Vice President of the Shipping Division in DFDS. “And since we are considering replacing the fleet on the Channel in 2031, the timing is really good.”

The initial plan is for replacement of the oldest of the ferries, Calais Seaways, which was built in 1991. Market developments will determine the final deployment plan, which will be announced in 2020.