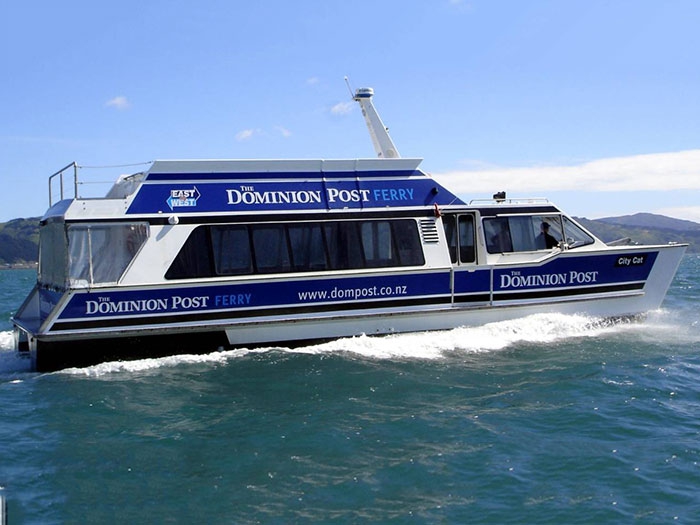 NOVEMBER 16, 2018 — Maritime New Zealand reports that the skipper of one of Wellington’s East by West ferries, Iain David Wilson, has been fined NZ$1,688 (about US$1,160) after speeding and grounding the passenger ferry, City Cat.

Maritime NZ Central Region Compliance Manager, Michael-Paul Abbott, said Wilson was the skipper of the City Cat at the time the ferry grounded at 17 knots, in a 5 knot area (31 km/h in a 9 km/h area), on a rock at Karaka Bay on April 16, 2017.

Mr. Abbott said the skipper did not have the correct navigational charts, did not maintain proper look-out and had repeatedly travelled at excessive speed prior to the grounding.

Mr. Wilson pleaded guilty to one charge under the Maritime Transport Act of causing unnecessary danger to the 18 crew and passengers on board, and other users of the harbor by breaching four Maritime Rules.

On the Sunday of the grounding, City Cat was on a regular run between Wellington city and the suburb of Seatoun. On board were 16 passengers, a deckhand and M.r Wilson.

City Cat carried the general navigational chart of Wellington harbor but not the detailed chart required by the Maritime Rules. The detailed chart shows a sudden shallowing of the water, and weed in the area 70 meters from shore. Weed indicates the presence of rocks and is ordinarily visible to vessels traveling in that area at the correct speed of 5 knots.

Mr. Wilson admitted he operated City Cat at least seven times in various parts of the harbor at speeds over the 5 knot limit within 200 meters of shore.

Mr. Wilson was prosecuted under the Maritime Transport Act 1994, which prohibits “dangerous activity involving ships or maritime products” and also makes it mandatory to comply with Maritime Rules (sections 65 and 66). The relevant Maritime Rules (MR) are:

“The Maritime Rules are about safety – they help protect passengers and crew, vessels and the environment,” Mr. Abbott said.

“The law makes the Rules mandatory and says breaching them is presumed to cause unnecessary danger or risk.

“This case shows how the Rules’ can work together. The right charts, keeping proper lookout and safe speed help give the skipper ‘situational awareness’ of what is happening around them and of possible risks to their vessel.

“Without that situational awareness Mr Wilson did not see the danger to City Cat and grounded at 10.45 am on a fine, calm day.

“It was a matter of luck that no one was badly hurt and, fortunately, no fuel was spilled into the harbor. City Cat was out of service being repaired for two weeks.”