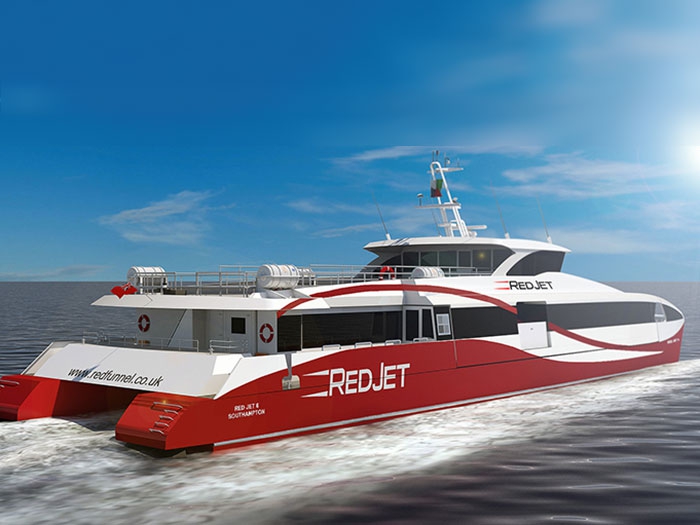 JULY 1, 2016 — The latest addition to the U.K.’s Red Funnel ferry fleet, Red Jet 6, successfully completed it first sea trials last month and will go into service in July between the Isle of Wight and the U.K. mainland.

Red Jet 6 is the most modern vessel in the Red Funnel fleet. Powered by four 900 kilowatt Series 2000 MTU engines, the catamaran is capable of service speeds up to 38 knots and has twice as many engines as its three sister ships which are also powered by MTU.

“We increased the number of engines from two to four to enhance redundancy,” says Shemara Refit Managing Director Peter Morton. “If the need arises, the engines can be shut down individually and the ferry can maintain the service running on three engines with only minor reduction in speed”

Each of the MTU engines powers a waterjet with the ZF gearboxes ensuring smooth transmission of power.

The catamaran will run every half hour, ferrying passengers between Southampton and the Isle of Wight. The distance of 9.9 nautical miles will be crossed in 23 minutes.

“We’ve used MTU engines exclusively in our high-speed fleet since the 1980s as their low operating costs and outstanding power-to-weight benefits make them ideal for the stop-start nature of our operation,” says Red Funnel Fleet and Technical Director Mark Slawson. “The benefits of the quad propulsion package fitted to Red Jet 6 is reduced fuel consumption and fewer cancellations to remove waterjet obstructions.”

The new cat is significantly more fuel-efficient than its sister vessels Red Jet 3, Red Jet 4 and Red Jet 5. It is certified with the environmental management standard ISO 1400:1 and is the greenest ship in the fleet. At over 40 m in length and able to carry up to 275 passengers, Red Jet 6 is also Red Funnel’s largest vessel.

MTU U.K. Managing Director Bruce Phillips said: “Red Jet 6 is the first vessel of its kind to be built in Great Britain in the last 15 years. We are very pleased with the results of our first joint project with Shemara Refit. Construction of Red Jet 6 has been an impressive process and we are delighted to have supplied MTU power to this new high-speed vessel.”

Red Funnel vessels have been ferrying passengers between the mainland and the Isle of Wight for almost 155 years and the company currently carries around 3.4 million passengers on the route every year.