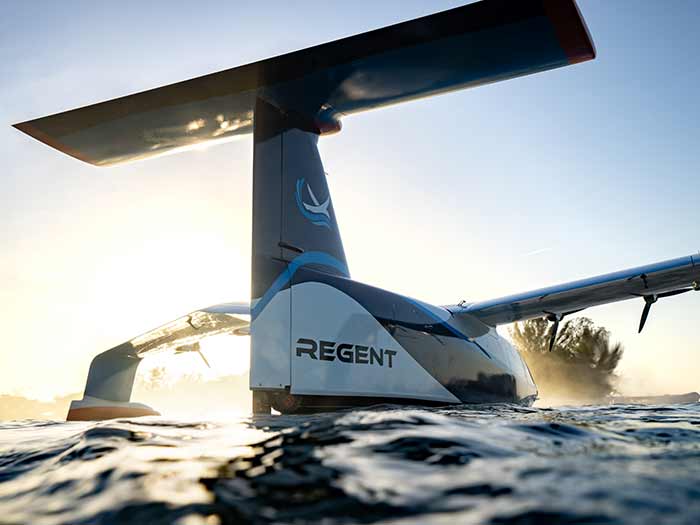 Germany headquartered FRS, whose operations include Seattle based FRS Clipper, joins a growing portfolio of international customers for the seaglider that includes Ocean Flyer in New Zealand, Split Express in Croatia, and Brittany Ferries in the United Kingdom and France.

As we reported earlier, REGENT (which is registered as Regent Craft Inc.) recently received a Bureau Veritas AiP for the seaglider and a quarter-scale, 18-foot wingspan technology demonstrator seaglider has completed its first successful series of flights in Narragansett Bay, R.I. The the company is now focused on developing a full-scale, 65-foot wingspan prototype with human-carrying sea trials expected to begin in 2024.

he partnership between REGENT and FRS is for the building and operation of two seagliders types: the Viceroys, each holding up to 12 passengers or critical cargo up to 3,500 lbs in 746 cubic feet, and the Monarchs, which can hold up to 100 passengers.

“REGENT’s seagliders fit perfectly to our product range in many of our worldwide operations,” says Moritz Bruns, Director Business & Corporate Development of FRS. “Providing safe and fastest travel possibilities, be it for commuters, tourists or even cargo clients is part of our DNA. The strategic partnership with REGENT enables us to further expand our route network and offer our clients new and unique travel possibilities and experiences around the globe.”

“We’re excited to be partnering with FRS to provide cost-effective, zero-emission passenger travel and cargo solutions,” said Billy Thalheimer, CEO of REGENT. “FRS has been a leader in maritime innovation for many years, pioneering a distributed operating model that is well suited for the global deployment of seagliders. From the United States, to Europe, to the Middle East, look for bright red FRS seagliders lowering the cost, time, and emissions of coastal travel soon.”

The REGENT seaglider is an all-electric wing-in-ground effect vehicle, meaning it flies low (within one wingspan) over the water to take advantage of numerous aerodynamic and operational efficiencies, enabling increased payload capability and greater range than other electric aircraft concepts. The seaglider operates in three modes: from the dock, the vehicle first drives on its hull like a traditional boat. As it leaves the harbor area and speeds up, it rises on its retractable hydrofoil, which offers significant wave tolerance and a smooth ride as it leaves a crowded harbor. Upon reaching open water, the vehicle transitions onto its wing, retracting the foil and accelerating up to cruise speed—all while staying within a wingspan of the water’s surface. Driving a seaglider is enabled by coupling advanced digital flight software with simple boat controls.

REGENT says that its seagliders will be able to service routes up to 180 miles at up to 180 mph with existing battery technology and up to 500 miles with next-generation batteries.About FRS

FRS (formerly Förde Reederei Seetouristik), based in the North of Germany, FRS has grown from a regional passenger ferry operator into an internationally active group with 70 vessels and more than 1,500 employees from more than a dozen countries all over the world. FRS annually carries 7.9 million passengers and 2.1 million vehicles on its national and international routes. Today, the FRS Group consists of 21 subsidiaries located in Europe, Northern Africa and America.