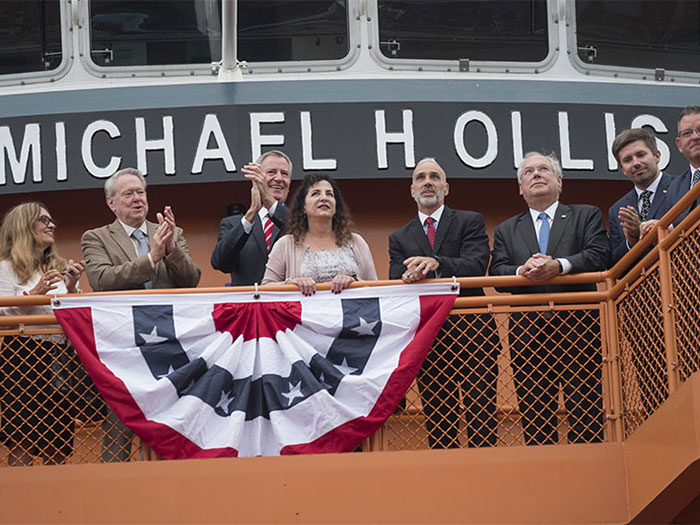 New York City Mayor Bill de Blasio, Department of Transportation Commissioner Hank Gutman, and Staten Island Borough President Jimmy Oddo yesterday officially commissioned the Staff Sergeant Michael H. Ollis, the first new vessel added to the Staten Island Ferry fleet since 2005. The $85 million, state-of-the-art ferry is named for Michael H. Ollis, a New Dorp, Staten Island, resident who was killed in Afghanistan saving the life of a fellow soldier in 2013. The Mayor was joined at the ceremony by honored guests, including members of the Ollis family.

The ferry has completed harbor trials and passed U.S. Coast Guard inspections, and will serve passengers for the first time later this year.

“Staff Sergeant Ollis represented the best of New York City, and we’re proud to honor his legacy with a beautiful addition to the iconic Staten Island Ferry fleet,” said Mayor de Blasio. “With two more new ferries on the way, we’re transforming this system into the modern, reliable, safe fleet Staten Island deserves – and we’ll carry Michael’s name with us every day the boat is in our harbor.”

The ferry is the first of three 320 foot, 4,500 passenger Ollis Class ferries to be delivered by Panama City, Fla., based Eastern Shipbuilding Group (ESG) which is providing regulatory and detailed production engineering, vessel construction, and delivery of the three ferries. They have been constructed in ESG’s Allanton yard. ESG’s newest facility in Port St. Joe, Fla/. performed the outfitting, testing, and trials tasks. The vessels have been a local attraction and significant source of economic development in the Gulf Region.

“This is a very special day for our company and the city of New York,” said Joey D’Isernia, President of ESG. “The Staten Island Ferry is an iconic transportation vessel recognized around the globe. For it to honor one of our fallen heroes makes it even more special. We are proud to deliver this extraordinary vessel despite the unprecedented challenges of a category 5 hurricane and a global pandemic, and are eager to see it provide comfortable and safe passage to millions of passengers each year.”

The new ferries are larger, reflect modern technology, and will operate more safely in extreme weather conditions. They feature popular design elements of past Staten Island Ferries and new customer-service amenities such as more comfortable seating and phone-charging outlets and an oval upper-deck promenade that will for the first time serve as an outdoor “walking track” for ferry riders. They have the latest in marine technology for energy efficiency and environmental friendliness. There are design features on the vessels that are part of the emergency response plan with the city. Lessons from 9/11 were built into this fleet and they can be connected to the New York fire vessels, also built by Eastern Shipbuilding Group, to support evacuations and rescue.

D’Isernia will give a presentation on the building of the Ollis class ferries at Marine Log’s upcoming FERRIES conference being held November 9, 2021 – November 10, 2021 at the Hyatt Regency Jersey City on the Hudson, Jersey City, N.J.

highlight of this year’s conference will be an in-person tour of the SSG Michael H. Ollis, sponsored by UES Seating. Attendees will get a guided tour of the vessel’s pilothouse, engineroom, and its passenger spaces.

NYCDOT will also allow guests to explore its full mission pilothouse simulator. Designed as a close reproduction of the Ollis Class pilothouse, the simulator features the same Furuno radars and Transas ECS units as the ferries.

A Q&A session will conclude the tour on the saloon deck of the ferry.