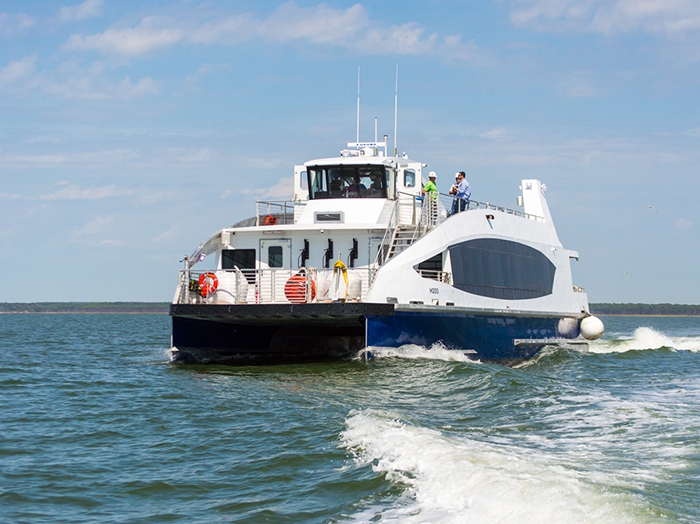 MARCH 22, 2017 — The first of 20 new boats built for the soon-to-be-launched Citywide Ferry Service has departed Horizon Shipbuilding in Bayou La Batre, AL, and is on its way to New York City.

The vessel, which departed the shipyard Tuesday afternoon, will travel 1,742 nautical miles, across the Gulf of Mexico, through Lake Okeechobee, and up the East Coast of the United States.

The vessel will cover about 280 nautical miles every 12-18 hours, with periodic port calls for refueling and any needed mechanical and system adjustments. Depending on weather and other conditions, the vessel is expected to arrive in New York Harbor early next month.

From start to launch, each CityWide Ferry vessel takes roughly eight months to complete. The vessel then undergoes a sea trial to ensure it is fit for service and for its maiden voyage up the East Coast.

“The first Citywide Ferry boat is officially on its way,” said New York City Economic Development Corporation President James Patchett. “Soon you’ll be seeing these modern, efficient vessels right here in New York Harbor. This is a major milestone toward launching Citywide Ferry this summer, and connecting more New Yorkers to good jobs and opportunities all along our waterfront.”

Designed by Incat Crowther, the 26 m aluminum hulled catamaran ferries are being produced by Horizon Shipbuilding and Metal Shark Boats in Franklin, LA. Besides constructing a new series of passenger ferries for Hornblower and the Citywide Ferry, Metal Shark recently secured separate orders to build ferries for Potomac Riverboats and the New Orleans Regional Transit Authority. Those vessels will also be produced at Metal Shark’s facility in Franklin, which was recently expanded to include a 60,000 ft2 assembly building and four assembly bays. Metal Shark, which also operates a vessel production facility at its headquarters in Jeanerette, LA, is reportedly close to announcing additional orders for the ferry market.

As we reported earlier, Metal Shark launched the first of its catamaran ferries for Citywide Ferry back on February 24. Plans are for Metal Shark to deliver two ferries per month from March until May.

The Hornblower Company has been selected as the operator of the new ferry system. When Citywide Ferry by Hornblower is fully operational in 2018, the six routes will carry an estimated 4.6 million passenger trips per year.