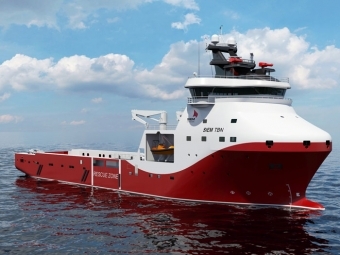 APRIL 12, 2016 — Siem Offshore, through its fully owned subsidiary Siem Offshore Australia Pty Ltd, was today awarded a charter contract by Woodside Energy Limited, Australia for a dual fuel (LNG/MGO) PSV of VS4411 design. The duration of the charter is for a term of five years plus two one-year options and is expected to commence in early 2017.

The vessel will be the first LNG fueled PSV to operate offshore  Australian and Woodside Chief Operations Officer Mike Utsler said the charter positioned the company as an early adopter of LNG as a marine fuel in the region.

“We’re thrilled to be the first company to bring one of these vessels to the southern hemisphere,” he said. “Australia is on track to become the world’s largest producer of LNG, so it makes perfect sense to build
dual-fuel capabilities for our marine fleets here.”

“Our LNG tankers use their cargo to power their engines, making them cleaner vessels that use less diesel,” said Mr. Utlser. “It’s natural that we progress this capability through to our support vessels,” he said.

The vessel will operate as part of the Woodside Integrated Fleet working offshore Dampier, Western Australia.
Woodside says it will continue to seek to expand the application of LNG-fueling in transportation in Western Australia.