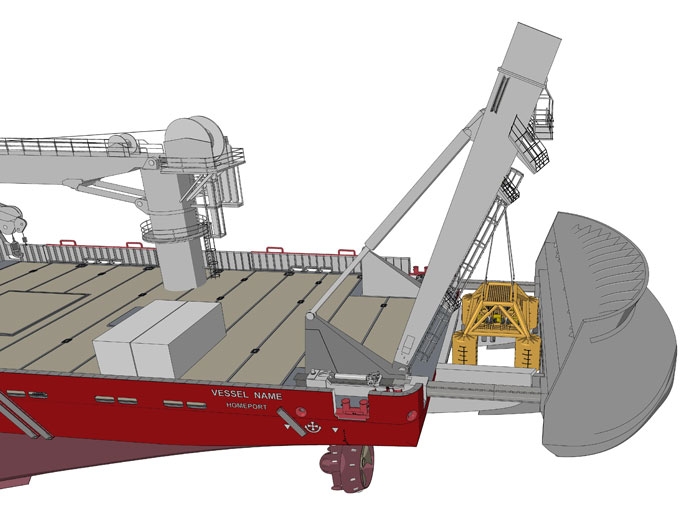 JUNE 2, 2015 — Ulstein today collected a Nor-Shipping Next Generation Ship Award for its X-Stern solution — and unveiled an X-Stern Extender concept.

Introduced last year (see earlier story), the X-Stern was developed from Ulstein’s X-Bow and is a design feature for DP-equipped vessels that increases operability through its positive impact on station-keeping and wave response in harsh conditions. Developed for vessels dependent on best possible motion characteristics, it has a sloping, higher stern, allowing for a sharp stern shape in which the transom plate is replaced by a pointed aft.

According to Tore Ulstein, the shipbuilding and design group’s Deputy CEO and Head of Market and Innovation, the X-Stern “operates in much the same way as the X-Bow sheltering the work deck, reducing the movement in transit and increasing comfort on board. The stern has less volume and thus a reduced wind impact, than a bow, meaning that the captain will choose to place the stern towards the weather once having reached destination.”

Suitable for conversions as well as newbuilds, the X-Stern Extender concept turns a relatively small vessel into a flexible subsea vessel with an extendable moon pool in the aft. This feature increases safety in subsea operations, and the vessel’s smaller size reduces total operational costs and its environmental footprint.

The X-Stern is already an innovation which expands the operational window and offers the captain the choice of placing the stern, rather than the higher and larger bow, towards winds, waves and current when on DP. The newly developed X-Stern Extender feature can be used for conversions as well as newbuilds.

“The feature widens the vessel’s operational window,” says Tore Ulstein. “This is not only by allowing it to utilize the stern heading against the weather but also by adding increased scope for operations, for the Extender, when outstretched, also includes a large moon pool. This is a big step when it comes to increasing safety in operations. The vessel can place subsea equipment through the extended moon pool through the use of cranes or an A-frame.”

“We believe this is a much better solution than working over the ship’s side, which can be a risky and strongly weather-dependent operation,” says Tore Ulstein. “Even for a subsea vessel that normally has a moon pool in the midst of the ship, valuable central deck space and hull volume will be freed up with the moon pool placed aft.

“The X-Stern Extender is an add-on; it is not part of the ship’s structure and not counted in the ship’s length. This is important when it comes to cutting costs. The deadweight, fuel consumption and operational costs for a fully functional subsea vessel will be reduced. In addition to these operational aspects, there are the central characteristics of the X-Stern: an aft deck protected from weather, extra volume and smoother motions.