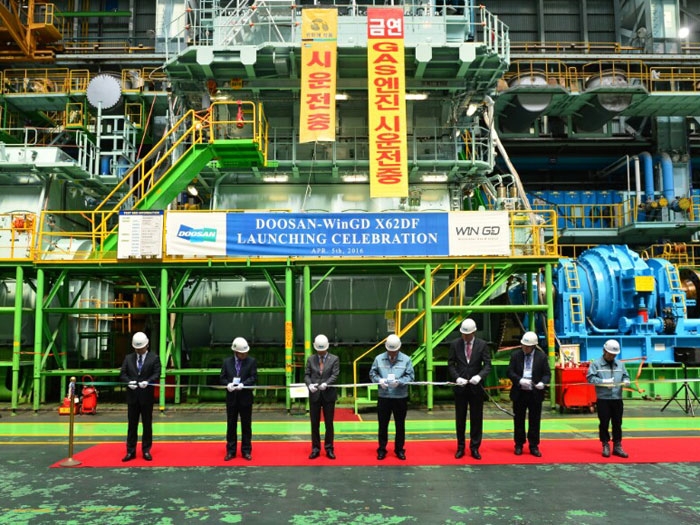 The W6X62DF engine is also the first X-DF engine to be sold for the new generation of very large LNG carriers. It is currently under predelivery testing at Doosan’s Changwon works and is one of a pair that will power the first of two 180,000 cu.m LNG carriers being built by shipbuilder Samsung Heavy Industries Co., Ltd for SK Shipping Co., Ltd and Marubeni Corporation. The vessels will operate on long-term charter to Total S.A. of France.

In addition to witnessing the W6X62DF running under a number of load and fuelling conditions, visitors to the X-DF powering the future event also saw validation of its engine control features, tuning, economy and emissions. Key aspects confirmed included the engine’s design fuel consumption, its Tier III NOx emissions compliance in gas mode without any additional exhaust treatment – and its capability to run stably in a wide operating window.

At a technical seminar, WinGD and Doosan also stressed the cost benefits of X-DF technology with low-pressure gas admission, saying that reductions in capital expenditure (CAPEX) of 15 to 20 % are possible compared to other low-speed dual-fuel engine technology, as validated on the new 180,000 cu.m LNG carriers. This results from the substantially simpler and lower cost LNG fuel gas handling system needed for gas admission at pressure below 16 bar. On the operating expenditure (OPEX) side, gains are expected, especially for LNG carriers, since no high-pressure gas compression system external to the engine is needed to enable the use of NBOG (Natural Boil-off Gas).

A further advantage, underlined during the W6X62DF demonstration run, is that WinGD X-DF technology allows stable operation on gas across the entire load range from 5% to 100%, so that there is no need to increase liquid fuel injection under any situation where sufficient gaseous fuel is available. Additionally, at around only 1% of the total heat released during combustion, pilot fuel consumption is lower than with other low-speed dual-fuel engine technology.

WinGD says that a “Fuel- sharing” feature will be available on X-DF engines later in 2016. It willgive vessel operators broad flexibility to use liquid and gaseous fuel at the same time if economically viable at a given time.