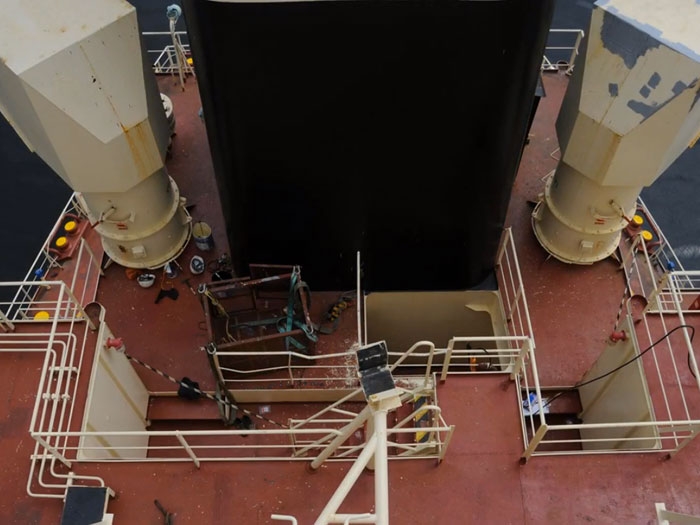 MAY 2, 2014 — The dangers of using ships’ provision cranes to lift personnel are underscored by a marine investigation report (M13L0055) released yesterday by Transportation Safety Board of Canada (TSB).

The report is on the TSB investigation of the accidental death of a crew member aboard the bulk carrier Federal Yoshino on May 8, 2013.

While the bulker was at anchor off  Baie-Comeau, Quebec, one of the crew members was in a basket attached to a provision crane to paint a recently-repaired engine room vent. While maneuvering the crane, the hoisting cable broke and the basket fell approximately 5 m before landing on the deck. The crew member was fatally injured.

The investigation found that the basket fell because the crane block above the basket exceeded its upward travel limit. The switch that was designed to prevent the upward travel beyond the set limit was improperly rigged, and thus did not function as designed.

Additionally, the crew member could not see that the crane block was beyond its upward limit.

The crane block made contact with the underside of the crane’s boom and the hoisting cable continued to pull, causing it to snap due to overstress, and the basket fell towards the deck.

Following the occurrence, the vessel owner and vessel management company immediately issued instructions to stop the use of provision cranes for lifting personnel. The vessel classification society DNV GL and the flag state, the Marshall Islands, also issued recommendations to prevent the use of lifting equipment to transport personnel and to take additional precautions when crew members work aloft.