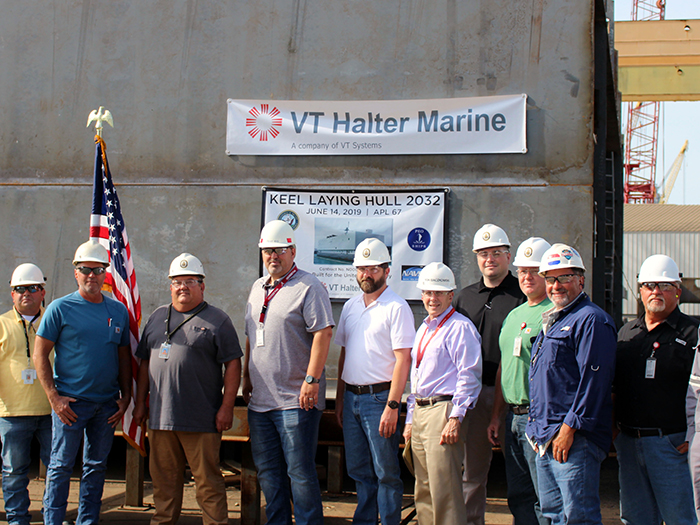 Attending the keel laying ceremony were representatives from the American Bureau of Shipping, SupShips Gulf Coast and VT Halter Marine

In a ceremony held June 14, Flag Day, VT Halter Marine Inc., Pascagoula, Miss., laid the keel to signify the start of construction of  the first of two Auxiliary Personnel Lighter – Small (APL(S)) berthing barges it is building for the U.S. Navy.

Traditionally, keel laying marks the ceremonial beginning of construction as the keel forms the ship’s backbone and is the first part of the vessel to be constructed.

“We are proud to serve our U.S. service men and women, so laying the keel on Flag Day for the APLs is most meaningful on this patriotic day,” said VT Halter Marine President and Chief Executive Officer, Ronald Baczkowski. “This is an important milestone to ensure our seamen have the best berthing accommodations. It is an honor for us to contribute to the safe welfare of our nation’s service men and women and to do our part for the nation’s defense.”

The U.S. Naval Sea Systems Command (NAVSEA) awarded VT Halter Marine a $77.9 million contract to design and build two firm units of the new class of berthing barges in September 2018, with options for another four. The first of these four options was exercised in February 2019, bringing the total value of the contract to $118 million.

When completed, the Navy will use these berthing barges to house crewmembers when ships are in port for maintenance and Inter-Deployment Training Cycles. They are mobile and can be towed to new bases or shipyards to support changing fleet requirements and also offer potential use for humanitarian missions and other temporary assignments.

The new vessels will be 82 meters long x 20.95 meters wide x 2.2 meters draft. Additionally, the vessels will be capable of seating 228 enlisted personnel and 56 officers for each meal. Each vessel is equipped with offices, classrooms, washrooms, laundry facilities, medical treatment areas, a barber shop and a fitness center.

The vessels are being fitted with mixed gender berthing spaces for 74 officers and 537 enlisted personnel, for a total of 611 people.