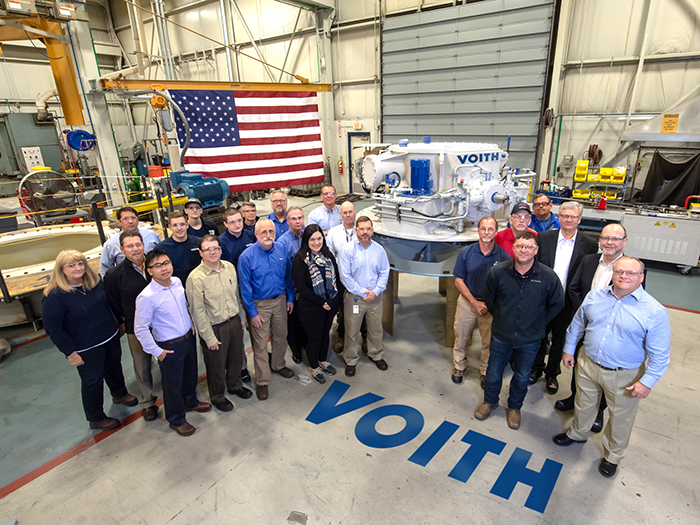 Commissioned by NCDOT, the VSP propulsion systems were built and tested in Voith’s York, Pa., facility to meet the unique specifications required for island-hopping ferries

Voith and the North Carolina Department of Transportation have teamed up to deliver the first two American-made Voith Schneider Propeller (VSP) units for a new, 38-vehicle river-class ferry, the Rodanthe, currently under construction at Bollinger Shipyard in Amelia, La,

The VSP propulsion systems were built and tested in Voith’s York, Pa., facility.

After assembly of the VSP units was complete in November 2018, the propellers were delivered to Bollinger Shipyards  for installation into the Rodanthe.

In May 2019, the ferry will be delivered to the NCDOT Shipyard in Manns Harbor, North Carolina, and it is expected to go into service in the summer of 2019 on the Outer Banks.

“With the new VSP units installed, the Rodanthe will offer years of smooth, efficient service to the islands. By linking steering and propulsion together, the VSP allows for fast response and precision movement in even the roughest of waters. This helps the operators pilot their ferry better while also keeping passengers and cargo safe thanks to the VSP’s superior handling in comparison to other propulsion systems available on the market,” said Ivo Beu, Head of Marine Business Americas for Voith.

Commissioned by NCDOT, the VSP propulsion systems were built and tested in Voith’s York, facility to meet the unique specifications required for the island-hopping ferries.

“These are the first VSP units ever built in the U.S., and they are being used to extend the NCDOT fleet of ferries utilizing this innovative propulsion system,” said Beu. “This is an important step to fulfill manufacturing requirements for government entities and businesses that want to support American workers. Likewise, by producing the VSP in Pennsylvania our North American production team expands its marine production expertise and capabilities to better serve our regional customers.”