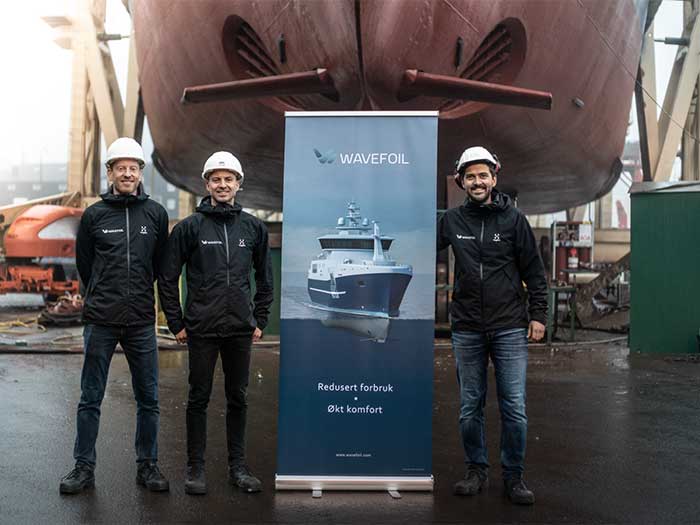 A Faroe Islands ferry, M/F Teistin, has become the first ship in the world to be fitted with retractable bow foils from Trondheim, Norway, based Wavefoil AS. The foils are designed to convert wave energy directly into propulsive thrust and reduce ship motions, thereby saving fuel and improving comfort on board.

It has been known for over 150 years that vessels with wings – or foils – in the bow can be partly or solely propelled by wave energy. The foils generate lift when the vessel is moving up and down in waves, and the lift typically has a forward thrust component larger than the drag.

Wavefoil AS says its “underwater wings” typically save 5-15% fuel and improves the comfort on board. Though the benefits of bow foils have long been known, Wavefoil is the first company to develop a commercial and patent-pending solution where the foils can be retracted into the ship hull, which, it says, is crucial for such foils to be a commercial success.

Wavefoil says that, since September 25, 2019, the bow foils mean that M/F Teistin has been partly powered by the waves of the North Atlantic Ocean, transporting thousands of passengers between Gamlarætt, Skopun and Hestur in the Faroe Islands

The area is exposed to heavy seas, and the installation was considered a success after its initIl three weeks of trouble-free operation.

“Our foil modules are suitable for ships shorter than about 200 m, sailing in wave-rich areas,” says Wavefoil founder and CEO Eirik Bøckmann. “We estimate that the foils may reduce the fuel consumption of Teistin by 10%” Bøckmann says, adding. “We could not have wished for a more suitable ship for our first installation than M/F Teistin. She sails a very exposed route and we see that the foils are used virtually all the time.”

Bøckmann has studied the effect of bow foils as a Ph.D. student and postdoctoral researcher at the Norwegian University of Science and Technology, NTNU

Wavefoil developed and produced the company’s first full-scale foil module with funding from NTNU Discovery, the Research Council of Norway, Innovation Norway and Climate-KIC, as well as private capital,

“In two and a half years, Wavefoil has taken an idea to market by means of government funding and private capital, including crowdfunding. This shows that the Norwegian incentives for startups work well and that Norwegians believe in green technology,” says Bøckmann.

The effect of bow foils has been thoroughly investigated through model tests and simulations.

“With the installation on Teistin we first and foremost intend to demonstrate that the retraction mechanism is dependable, and that the system is easy to use for the crew. So far it appears that we have succeeded in doing so,” says Audun Yrke, Technical Manager of Wavefoil.

The next delivery is just around the corner. Wavefoil is now producing foil modules for a new ambulance vessel in Norway’s western Finnmark county, which is due for delivery from the Maritime Partner shipyard in Ålesund in the summer of 2020.