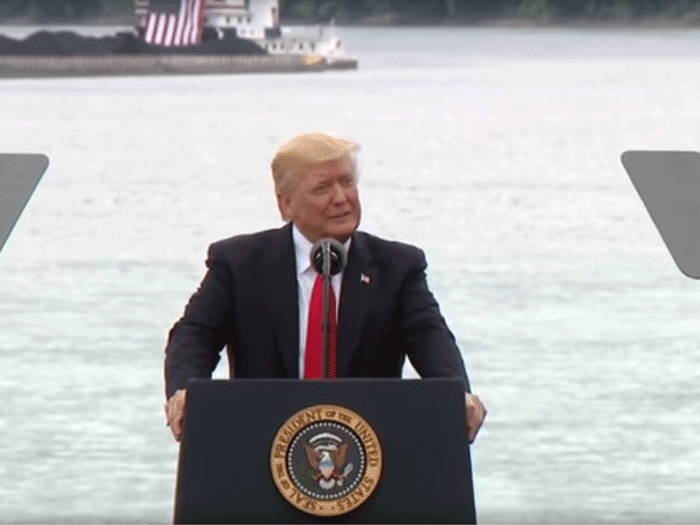 Symbolically, President Trump used Ohio River as a backdrop for a speech launching his infrastructure initiative

JUNE 8, 2017 — President Donald Trump yesterday used the Ohio River as the backdrop for a major speech on his legislative agenda on infrastructure — and, drawing praise from the Waterways Council Inc., he made it clear that the waterways are very much part of those plans.

According to a White House release “America’s infrastructure is out of date and falling apart, particularly the internal waterways that are so vital for transporting the country’s goods.”

The infrastructure of America’s inland waterways has been allowed to fall apart (continues the release), causing delays and preventing the United States from achieving its economic potential.

WCI applauds President Trump’s visit to the heartland and for his speech today that will surely bring heightened attention to the investment needs of the inland waterways system. Our country has not seen this kind of leadership on infrastructure since President Franklin D. Roosevelt’s 1930s New Deal to build our locks and dams, or since the 1950s by President Dwight D. Eisenhower to construct the National Defense and Interstate Highway system. Today, Presidential leadership was demonstrated once again by emphasizing the importance of the inland waterways transportation system and this critical national infrastructure with the backdrop of the river itself. As President Trump said, the nation will rebuild Rivers, along with Roadways, Runways and Railways.

We applaud the President for committing his vast building experience to modernizing the inland waterways, and establishing a goal of completing projects on-time, on-budget, and removing regulatory impediments.

We stand ready and committed, and look forward, to working with the Administration to craft proposals that work equitably for the inland waterways, a critical part of the transportation supply chain and conduit to American exports.