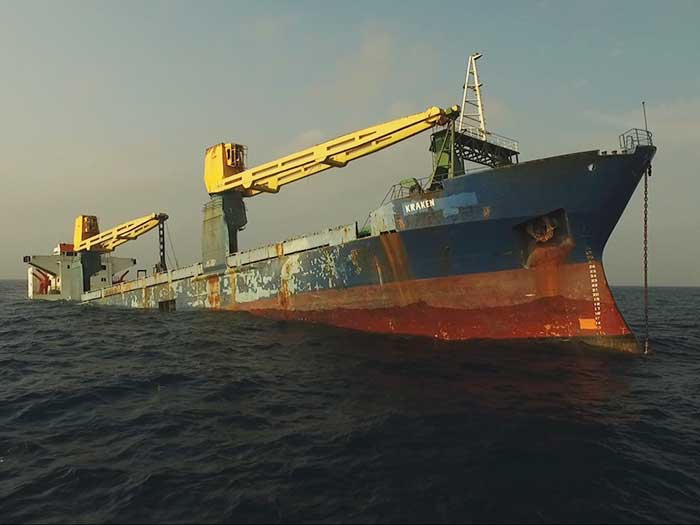 Dubbed the Kraken after the mythical, squid-like sea monster immortalized on film and in literature, the vessel was sunk 67 miles off the coast of Galveston to create a new artificial reef.

Prior to becoming the Kraken, in 2016, the 1987-built 9,662 dwt ship had sailed under a number of names and flags for various owner, including most recently as the Panama-flagged SCM Fedra for project cargo specialist SCM Lines.

The Kraken began its journey in May 2016 when it was towed from Trinidad to Brownsville, Texas to be repurposed for its new life as an artificial reef 140 feet below the surface. Contractors with Cahaba Disaster Recovery LLC worked with the Artificial Reef Program to remove all fuel, oil and hazardous materials from the vessel in order to comply with the Environmental Protection Agency’s best management practices.

Over time, the sunken ship will become an artificial reef that attracts fish, coral and other invertebrates as well as divers and anglers. The Kraken’s proximity to the Flower Gardens Marine Sanctuary also makes it a premiere dive location in the Gulf of Mexico.

“The entire marine ecosystem benefits from artificial reef projects like the Kraken,” said TPWD Artificial Reef Program Leader J. Dale Shively. “The Gulf of Mexico has only a few naturally occurring reefs so whenever we are able to add a new structure like this, the whole area benefits from the added habitat and species diversity.”

As an Artificial Reef Program Ships-to-Reefs project, the sinking of the Kraken was made possible by donations and Deepwater Horizon Oil Spill natural resource damage settlement funds jointly provided by natural resource trustee agencies in Texas which include the Texas Parks and Wildlife Department, Texas Commission on Environmental Quality and Texas General Land Office.