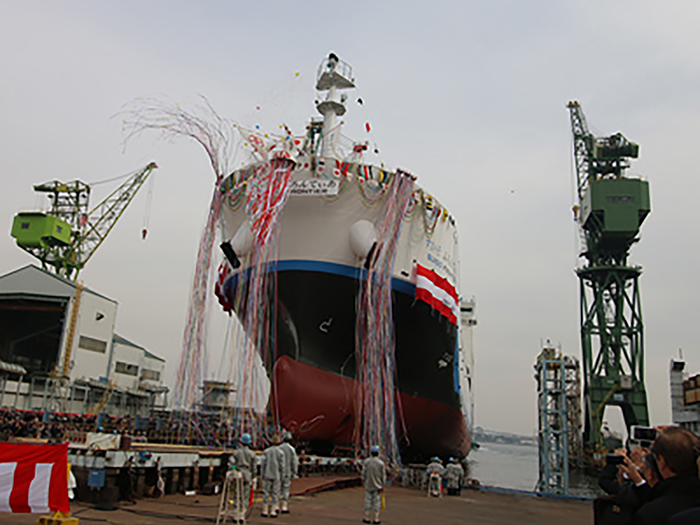 Suiso Frontier (Kawasaki hull no. 1740) will be the world’s first liquefied hydrogen carrier

This vessel was developed to provide a means of transporting liquefied hydrogen at 1/800 of its original gas-state volume, cooled to –253°C, safely and in large quantities over long distances by sea.

Kawasaki plans to install a 1,250 cu.m vacuum-insulated, double-shell-structure liquefied hydrogen storage tank, currently being manufactured at Harima Works, on the ship and complete the vessel’s construction by late 2020.

Once complete, the Suiso Frontier will be used for technology demonstration testing aimed at the establishment of an international hydrogen energy supply chain in which liquefied hydrogen produced in Australia will be shipped to Japan.

Hydrogen is gaining popularity as a key next-generation energy source to combat global warming. It does not emit CO2 or other greenhouse gases during use, and expected applications include power generation, fuel cell vehicles and more.

Alas, that does not mean that the hydrogen carried in the Suiso Frontier will be particularly good news from the planet. It will be shipped to a liquefied hydrogen unloading terminal that is being built in Kobe from a brown coal gasification facility being constructed in Australia.

Hydrogen produced from brown coal is not considered a green fuel, unless carbon capture and storage technology is used. Apparently, that won’t be the case in the pilot phase of the Australian project.