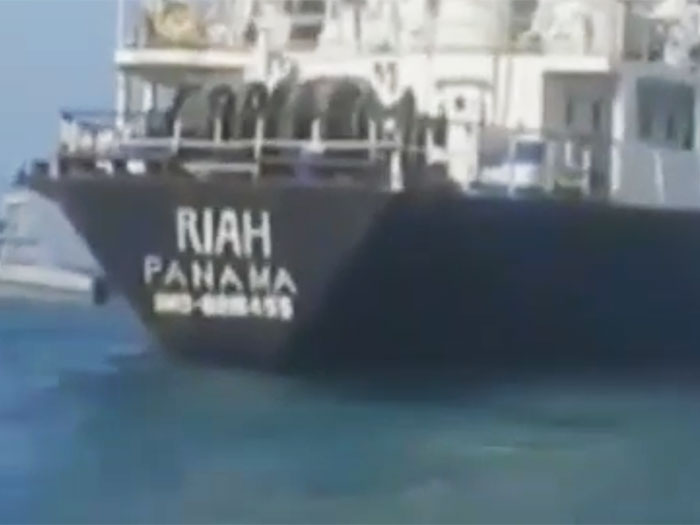 Tanker is alleged to have been smuggling Iranian fuel

Iran’s Islamic Revolution Guards Corps (IRGC) has released video of its recent capture of a foreign tanker said to have been smuggling one million liters of Iranian fuel near the Strait of Hormuz.

According to Iran’s Press TV, a local IRGC naval command post published the details in a statement that said the incident took place to the south of the Iranian Larak Island on Sunday.

IRGC naval forces, said the statement, were patrolling the waters on an anti-smuggling mission, and acted against the vessel in a “surprise” operation upon ascertaining the nature of its cargo and securing the required legal approval from Iranian authorities.

The ship had loaded the fuel from Iranian dhows and was about to hand it over to other foreign vessels in farther waters. The vessel, which had 12 foreign crew members aboard at the time of the seizure, is capable of carrying two million liters of fuel.

The statement hailed the naval forces’ “perceptiveness” in frustrating the smuggling effort, adding that the crime had invoked due legal proceedings.

“The [Iranian] naval units in this area will continue to conduct security operations and missions aimed at confronting organized fuel smuggling efforts … decisively and keenly around the clock,” it added.

The forces “do not hesitate for a moment to preserve the Iranian nation’s interests and assets,” it noted.

The ship’s name and IMO number, clearly visible in the video, identify it as the 1,899 dwt, 1988-built oil products tanker Riah. According to the Equasis data base the ship is operated by Prime Tankers of Dubai. The registered owner is Riah Shipping and Trading which lists its address as “in care of” Prime Tankers.