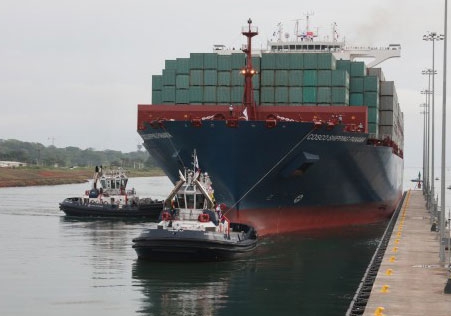 Inaugural transit was made by COSCO Shipping Panama, carrying 9,472 TEU of containers

Among those welcoming the expansion of the Panama Canal is Maersk Line, which is expecting to perform more than 400 vessel transits through the Canal whilst carrying more than 400,000 containers.

Maersk Line notes that the expanded Panama Canal is estimated to generate a 3% increase in cargo volumes transiting the Canal. Since 60% of the Panama Canal traffic either begins or ends in U.S. ports it will have a direct, notable impact on the trade between Asia and the United States East Coast.

“As a long-time customer, Maersk Line welcomes the expansion of the Panama Canal. We look forward to seeing our larger vessels pass through the new locks. It is a very positive development for trade, Panama and the region, and of course the shipping lines that transit this important corridor every day,” says Søren Toft, Chief Operating Officer, Maersk Line.

“The expansion provides us with more options, most notably to our Asia to South America and Asia to U.S. East Coast routes. It is likely that Maersk Line will make increased use of the expanded Panama Canal and adjust one or more services with larger vessels to begin sailing through its new locks,” said Anders Boenaes, Head of Network, Maersk Line.

The inaugural transit began yesterday as the COSCO Shipping Panama entered the Agua Clara Locks on the Atlantic Side.Originally named Andronikos, the vessel was renamed to honor and pay respect to the country of Panama and the Canal.

The official Inauguration ceremony took place when the ship reached the Cocoli Locks on the Pacific side of the Canal.

The Expansion Program is the Canal’s largest enhancement project. It included the construction of a new set of locks on the Atlantic and Pacific side of the waterway and the excavation of more than 150 million cubic meters of material, creating a second lane of traffic and doubling the cargo capacity of the waterway. While the Expanded locks are 70 feet wider and 18 feet deeper than those in the original Canal, they use less water due to water-savings basins that recycle 60 percent of the water used per transit.