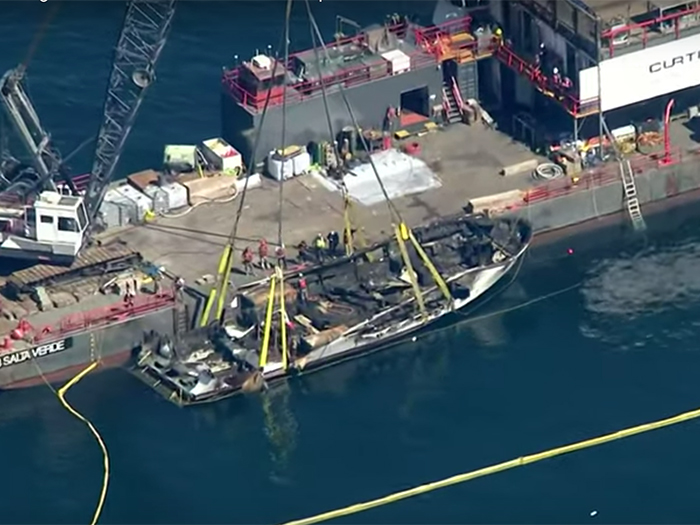 Ten days after the Truth Aquatics dive boat Conception burned and sank, killing 34 people, KTLA 5 today broadcast live coverage of the wreck as it was pulled from the water. Today, too, the National Transportation Safety Board issued its preliminary report on the incident.

Among the NTSB’s initial findings is that all six members of the dive boat’s crew were sleeping at the time the fire broke out, some time prior to the initial distress call made September 2, 2019, at about 3:14 a.m. Pacific daylight time, to U.S. Coast Guard Sector Los Angeles/Long Beach.

The NTSB says that initial interviews of three crew members revealed that no mechanical or electrical issues were reported. At the time of the fire, five crew members were asleep in berths behind the wheelhouse, and one crew member was asleep in the bunkroom, which was accessed from the salon down a ladder well in the forward, starboard corner of the compartment. The bunkroom had an emergency escape hatch located on the aft end, which also exited to the salon. There were two, locally-sounding smoke detectors in the overhead of the bunkroom.

A crew member sleeping in the wheelhouse berths was awakened by a noise and got up to investigate. He saw a fire at the aft end of the sun deck, rising up from the salon compartment below. The crewmember alerted the crew behind the wheelhouse. As crew members awoke, the captain radioed a distress message to the Coast Guard.

Unable to open the window and overwhelmed by smoke, the crew jumped overboard.

Two crew members and the captain swam to the stern, reboarded the vessel, opened the hatch to the engine room, and saw no fire. Access to the salon through the aft doors was blocked by fire, so they launched a small skiff and picked up the remaining two crew members in the water. They transferred to a recreational vessel anchored nearby (Grape Escape) where the captain continued to radio for help, while two crew members returned to the Conception to search for survivors around the burning hull. Local Coast Guard and fire departments arrived on scene to extinguish the fire and conduct search and rescue. The vessel burned to the waterline by morning and subsequently sank in about 60 feet of water.

Investigators have collected documents from recent Coast Guard inspections and visited another Truth Aquatics vessel, Vision, a vessel similar to the Conception. Salvage operations to bring the wreckage to the surface for examination and documentation have begun. Investigators plan to examine current regulations regarding vessels of this type, year of build, and operation; early-warning and smoke-detection and alarm systems; evacuation routes; training; and current company policies and procedures. Efforts continue to determine the source of the fire.

As investigations continue, the Coast Guard has already issued a safety bulletin that identifies regulations related to firefighting, lifesaving, preparations for emergencies, and means of escape and that recommended that owners, operators, and masters of passenger vessels immediately