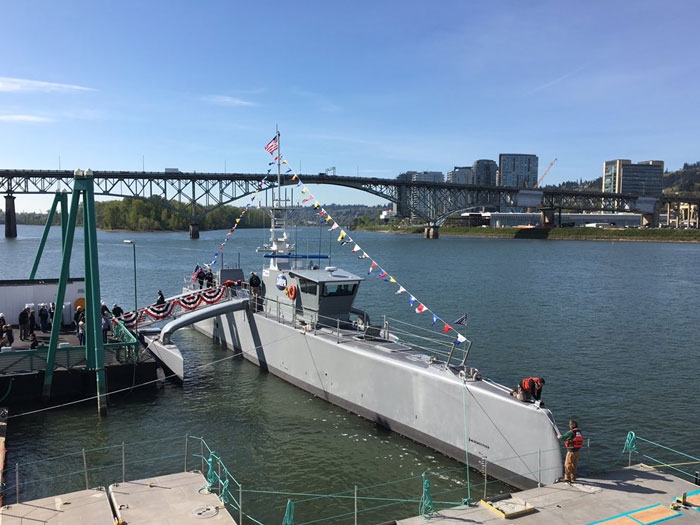 Among those attending today’s christening was Roger Krone, Chairman and CEO of Leidos (NYSE: LDOS), which led the team that designed and built the vessel.

Sea Hunter embodies the ACTUV program’s goals of developing a highly autonomous unmanned vessel capable of operating over thousands of kilometers on the open seas for months at a time under only sparse remote supervisory control.

“ACTUV could enable future capabilities that would greatly extend our customers’ ability to cost-effectively monitor the maritime environment while keeping our servicemen and women safe,” Mr. Krone said. “This event showcases exciting advances in autonomous technology, and highlights our open architecture approach and extensive testing that has made ACTUV a reality.”

Leveraging decades of naval architecture experience, Leidos began construction of Sea Hunter in 2014. With its modular, twin screw, trimaran design, the vessel is designed for enhanced stability in all kinds of weather. It incorporates a diverse sensor suite, including sonar, electro-optical, and short- and long-range radars.

Through at-sea testing on a surrogate vessel, Leidos has proved ACTUV’s autonomy suite capable of operating the ship in compliance with maritime laws and conventions for safe navigation—including International Regulations for Preventing Collisions at Sea, or COLREGS.

Following the christening, the Sea Hunter is scheduled to embark on a two-year test program jointly run by DARPA and the Office of Naval Research in the Southern California operating area.

The aim is to fully test the vessel’s capabilities and innovative payloads to transition the technology to the U.S. Navy for operational use.
ACTUV is designed to normally operate under sparse remote supervisory control but can also serve as a remotely piloted vessel, should the mission or specific circumstances require it. In either case, it would operate at a fraction of the cost of manned vessels that are today deployed for similar missions.

“Although ACTUV will sail unmanned, its story is entirely about people,” says Scott Littlefield, DARPA program manager. “It will still be sailors who are deciding how, when and where to use this new capability and the technology that has made it possible. And we could not have overcome the massive technical challenges to reaching this point without the creative, committed teamwork of our commercial partners and the Office of Naval Research.”