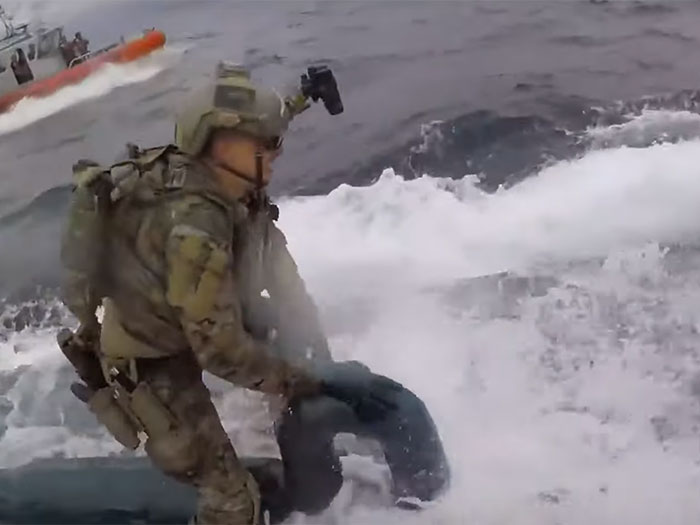 The Coast Guard has released dramatic video of a June 18 incident in which crew members of the U.S. Coast Guard Cutter Munro (WMSL 755) boarded a narco sub while operating in international waters in the Eastern Pacific.

The interception of what the Coast Guard terms a self-propelled semi-submersible suspected drug smuggling vessel was one of 14 separate suspected drug smuggling vessel interdictions and disruptions off the coasts of Mexico, Central and South America by three Coast Guard cutters between May and July 2019. This was the Munro’s first deployment to the region.

The Munro yesterday offloaded more than 39,000 pounds of cocaine and 933 pounds of marijuana worth a combined estimated $569 million in San Diego, in the presence of Vice President Mike Pence.

“Let me commend you especially for your new deployment to the Eastern Pacific corridor,” said Pence. “Even though this is a new area of deployment for this cutter, you’ve already proven yourselves more than up to the task… fourteen operations went into this offload, and one of them was of a self-propelled, semi-submersible vessel (SPPS), which resulted in the largest Coast Guard removal in four years. The Coast Guard is seizing illegal drugs at a faster rate than ever before. And you all have been at the tip of the spear, making that happen.”

While the Munro, a National Security Cutter, was commissioned in 2017, 70% of the Coast Guard’s offshore presence is the service’s aging fleet of medium endurance cutters, many of which are over 50 years old.

“Our Coast Guard deserves better,” said Pence. “And that’s why we are committed to fully funding our Coast Guard, including replacing old ships with new ones, just like the cutter Munro.”