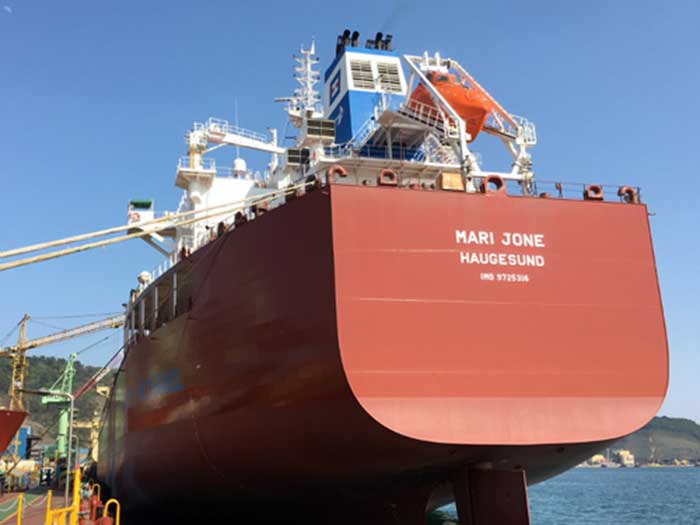 APRIL 27, 2016 — Vancouver, Canada, headquartered Methanex — the world’s largest producer and supplier of methanol —reports that this month marks one year since its subsidiuary, Waterfront Shipping (WFS), began welcoming seven of the world’s first ocean-going vessels capable of running on methanol into its fleet. The first three vessels were delivered in April and the remaining four later in 2016.

“It has been exciting working with our shipping partners over the last few years to advance this new, clean technology,” says Jone Hognestad, former President of Waterfront Shipping, who retired in last month. “Investing in methanol-based marine fuel is an important step in the right direction and reinforces our commitment to sustainable proven technology that provides environmental benefits and meets emission regulations.”

“In 2012, we were looking to renew part of our fleet as time charter vessel contracts naturally expired and to add new vessels to the fleet to meet increased product transportation needs,” says Hognestad, noting that, as awholly owned subsidiary of Methanex Corporation, “it was only natural that we investigated methanol as a future fuelf or our vessels,”

Engine designer MAN Diesel and Turbo SE, and the two shipbuilders building the vessels, Hyundai Mipo Dockyard in Korea and the Minaminippon shipyard in Japan worked closely to make the project a reality

In April 2017, Marinvest celebrated two of its vessels together attaining over 3,000 hours running on clean-burning methanol, and estimated that the use of methanol rather than conventional marine fuel had prevented more than 80,000 kilograms of sulfur oxide emissions. Results like this speak to the environmental benefits of using methanol as an alternative marine fuel by significantly reducing the emissions of sulphur oxides, nitrogen oxides and particulate matter.

Rolf Westfal-Larsen Jr., CEO Westfal-Larsen Management, says that, with two of its methanol burning vessels — Leikanger and Lindanger— in operation and in the waters, “we have found methanol to be one of the best alternative fuels due to its wide availability, the use of existing infrastructure, and the simplicity of the engine design and ship technology.”

He adds that methanol shares similar characteristics with other marine fuels with respect to storage and handling and can even be bunkered by trucks if required.

“Investing in technology that encourages the use of a fuel like methanol that significantly reduces emissions is a step forward for both our company and the shipping industry” says Akio Mitsuta, Senior Managing Executive Officer, Mitsui O.S.K. Lines, Ltd. This is the reason we were very pleased to partner with Waterfront Shipping and others to have three of our vessels — Cajun Sun, Taranaki Sun and Manchac Sun– built with the first of its kind MAN dual-fuel technology, “We are proud to invest and have two of our JV vessels, Mari Jone and Mari Boyle, built with the first-of-its kind MAN B&W ME-LGI two-stroke dual-fuel engine,” says Patrik Mossberg, Chairman, Marinvest/Skagerack Invest. “Our overall focus in the development of the dual-fuel system concept has been safety and engine reliability. We have found the technology for handling methanol is well developed and offers a safe dual-fuel solution for low-flashpoint liquid fuels. Safety measures include all methanol fuel equipment and distribution systems double-walled and ventilated with dry air, ensuring there is no direct contact with methanol and safe for operators and engineers. Any operational switch between methanol and other fuels is seamless and records a slightly better efficiency compared to conventional HFO-burning engines. Our vessels have regularly been running on methanol and we foresee this continuing going forward.”

The next step? “Tests in blending water with methanol also show promising results in terms of meeting the International Maritime Organization’s NOx Tier III requirements,” says René Sejer Laursen, Sales & Promotion Manager, MAN Diesel & Turbo. “Such a new Tier III solution could become a game changer. Further tests are scheduled in the near future to conclude if this could be a new way forward.”