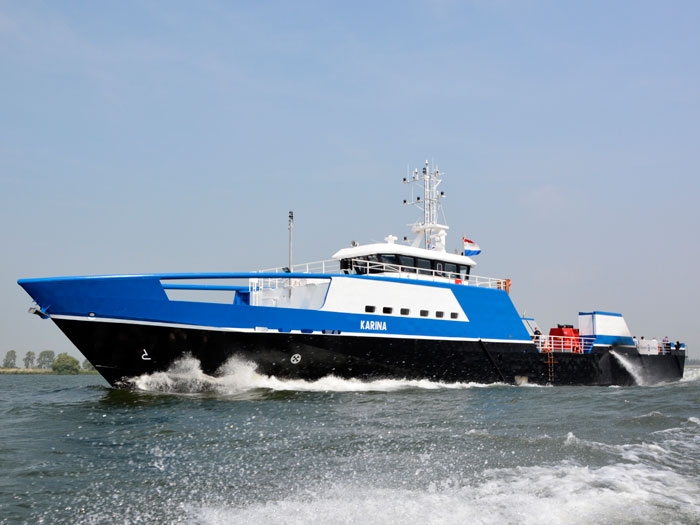 De Hoop’s design focus was on “speed keeping,” rather than “top speed.” Though other vessels of this type have a higher nominal top speed, De Hoop says that it drops as soon as they take on deck cargo weight. In contrast, the full-displacement De Hoop design maintains its speed whatever the draft or cargo weight.

De Hoop says that the thrust curve after the sea trials demonstrated the high efficiency and increased “grip” of the high-torque propellers used in the hybrid FSIV. This is largely the result of the application of two propellers, instead of three or four smaller propellers, which has hitherto been the standard in high-speed vessels of this type. Two propellers have a higher efficiency than three or four smaller propellers, as a result of the relatively large blade area in relation to resistance-increasing appendages under water. De Hoop says that FSV designs that are propelled by water jets have an even greater loss of efficiency. A further disadvantage of using multiple smaller propellers or water jets is that speed decreases much faster when they take cargo on board.

De Hoop’s FSIV2000 has been developed for the combined transport of deck cargo and passengers  to offshore oil fields. Optionally, the shipbuilder also offers a variety of below-decks tank configurations for the transport of liquid cargo.

The FSIV is available in a range of models for a wide variety of applications, with deadweight capacities from 200 up to 40 0tons.

Custom designed by De Hoop to stringent environmental standards, the 55 m x 9 m FSV is constructed primarily for very low fuel consumption. The vessel is powered by a unique hybrid diesel-direct/diesel-electric system, which makes it very environmentally friendly  to start with.

At low speed and during maneuvering, only the portside diesel engine will be used to drive a generator. The generator, in turn, delivers power, via a DC-bus switchboard, to the two electric motors that drive the propeller shafts through the gearboxes. While the starboard engine is completely shut down, this provides fuel savings at low speed up to approximately 12 to 13 knots and when in Dynamic Positioning mode. The maximum speed in diesel-electric mode is 13 knots. To obtain this speed only 410 kW of power is required, reflected in a fuel consumption of less than 150 liters/hour  at  13knots.

At higher speed, both Caterpillar 3516 diesel engines will engage with the gearboxes to provide up to 2,350 kW at 1,800 rpm each, directly to the two propellers. In diesel-direct mode, the two fixed pitch ducted propellers are capable of producing up to 3.7 MW with 200 metric tons payload in total, achieving a maximum speed of 21.3knots with these particular propellers. Optional, De Hoop also offers a configuration with “fast” (high rpm) propellers, providing a maximum speed of over 25 knots. In this configuration, the gain in speed, however, will slightly decrease the characteristic “speed keeping” aspect.

When going from lower speed to full-throttle the smart power-management system automatically switches from diesel-electric to diesel-direct mode, resulting in a rapid acceleration: this changeover is performed within seconds

Basically having a DP1 notation, the vessel’s hybrid configuration offers the optional advantage of an easy upgrade to DP2.

The multi-chine all-steel hull is optimized for fuel efficient operations during both transit and DP modes.

The vessel is of lightweight steel construction and is built according Germanischer Lloyd’s High Speed Craft (HSC) rules, with extensive weight reductions achieved by using High Tensile Steel in combination with sophisticated construction techniques to obtain a high-strength hull. The small entrance angles of the waterlines and the long’ bowlines have the additional advantage of improved seagoing characteristics and thus less speed loss in more challenging sea states. Even at a speed of 20 knots the accelerations remain well within the comfort levels, while the extended flared upper bowlines reduce the amount of green water and make for a dryer ship.

The 200 sq.m cargo deck aft is well protected by the forward superstructure, high freeboard and side stacks, guaranteeing a safe passage for the 200 tons deck mounted cargo. A second cargo deck of 40 square meters is located in front of the accommodations, and is protected to a certain extend by the high bulwarks/coaming construction and two strong longitudinal tubes between the structure and the bow. Fittings and lashing to secure one 20 feet container are provided.

Further fuel savings are achieved by applying a bulbous bow and the (optional) Hull Vane.

The Hull Vane, developed by Van Oossanen Naval Architects, consists of a fixed foil positioned below the hull behind the rudder(s), fitted by means of struts. For this FSIV a further reduction in power consumption, ranging from 11% to 15% depending on the speed, can be achieved. At higher speed of the vessel and increasing wave heights is where the advantages of the Hull Vane come in to play. Another characteristic of the Hull Vane is its stabilizing effect in head seas, due to the inhibitory influence of the foil to the vertical motion: thus reducing heave and pitch.

The vessel provides day accommodations for a total of 100 seated passengers. They are positioned a quarter of the ship’s length behind the bow, where the acceleration levels are at their lowest.

Shipyard De Hoop’s says its experience in luxury cruise vessels is reflected in the high standards of the accommodation.  This includes low noise and vibration levels to provide the crew as well as the passengers with an exceedingly high level of comfort. As a result of the design of the vessel and its propulsion configuration, in combination with a sophisticated insulation system, extremely low sound levels are achieved: No accommodation space has a sound level above 58dB(A) at full speed.

The 100 sq. m passenger space has comfortable seats, ample luggage storage space and a self-service buffet. On-demandmusic and video entertainment facilities are provided for each passenger in the style of an aircraft cabin.

The vessel will be manned and operated by a crew of eight, accommodated in four double berth cabins, each with its own bathroom.

De Hoop says a number of benefits stem from the design decision to construct the ship entirely from steel.  The first is economic as steel costs less than aluminum. It is also easier to repair, requiring less advanced equipment and techniques. De Hoop says that using steel makes the design more versatile as the vessel is easily customized for fire-fighting purposes (aluminum requires pre-wetting, steel does not). Lastly, in a world where terrorism and piracy are ever present, when compared to aluminum, steel is relatively easier to be made bulletproof.

De Hoop has two shipyards: De Hoop Lobith, in the east of the Netherlands, with 135 employees and De Hoop Foxhol, in the north, with 65 employees.