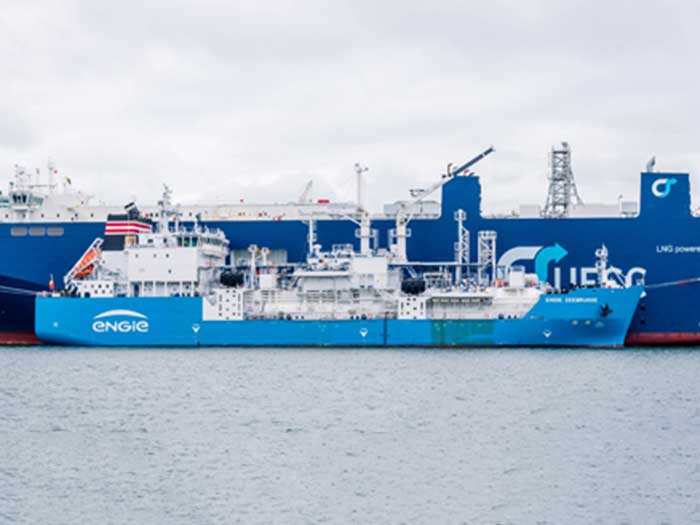 The LNG bunkering operations were conducted at the same time that the PCTCs were carrying out cargo operations.

ENGIE Zeebrugge, which is the world’s first purpose-built LNG bunkering vessel, arrived in Zeebrugge at the beginning of April after delivery from the Hanjin Heavy Industries & Construction Co. Ltd shipyard in Busan, South Korea, and a 38-day maiden voyage.

She is now providing a weekly service to the UECC PCTCs and is the world’s first LNG bunkering vessel to perform regular ship-to-ship bunkering services.

The 5,000 cu.m LNG capacity ENGIE Zeebrugge is jointly owned by ENGIE, Mitsubishi Corporation, NYK Line, and Fluxys and will service all types of shipping customers in Northern Europe from her home port of Zeebrugge, under the Gas4Sea brand name, launched in September 2016 by ENGIE, Mitsubishi Corporation, and NYK Line to promote and develop the use of LNG as a sustainable alternative to conventional oil-based marine fuels.

UECC is jointly owned by NYK and Wallenius Lines and is one of Europe’s leading short sea RoRo operators.

Built by Kawasaki Heavy Industries Ltd.’s NACKS shipyard in Nantong, China, the 4,000 car capacity Auto Eco and Auto Energy are the largest dual-fuel PCTCs in the world, and the biggest ever 1A super Finnish/Swedish ice classed vessels. Each has an MAN B&W 8S50ME-C8.2-GI main engine,