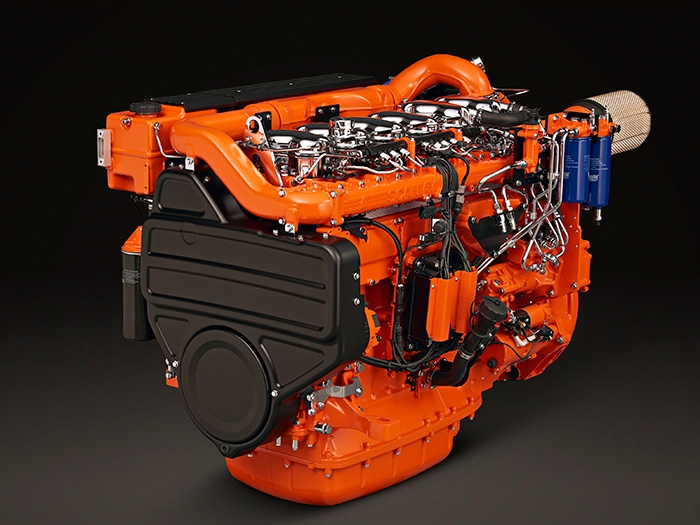 NOVEMBER 30, 2017 — Scania has added a new six-cylinder 13-liter inline engine to its marine engine portfolio that offers power outputs of 650 to 925 hp with reduced fuel consumption. The new engine uses XPI fuel injection technology to reach higher power levels and lower fuel consumption. XPI technology was first introduced in Scania’s marine engine offerings in 2015 when its 1,150 hp V8 engine was launched. However, the system has been used in Scania’s engines for trucks and industrial applications since 2007, so the new engine benefits from a wealth of experience of this technology.

“With the new power output levels, Scania is reinforcing its class-leading power-to- weight ratio and allowing our customers to increase their range of operation within current application areas, thanks in large part to the new Scania XPI fuel system,” says Torben Dabrowski, Global Product Manager, Marine at Scania Engines.

The engine is on display at this week’s International Workboat Show in New Orleans, LA on November 29 – December 1, 2017, booth number 3201 before continuing overseas.

“This new engine will give planing workboats a solution that meets their commercial power needs, exceeds other competitor engine’s duty-cycles while meeting emissions requirements. The high power and weight savings will allow designers the flexibility to add these EPA Tier 3 engines, up to 800 hp, without needing complex after treatment.” says Alberto Alcalá, Marine Sales Manager at Scania USA.

The new marine engine range is part of Scania’s modular system, which has been continuously developed over several decades and the range offers our customers an ingenious tailored transport solution. The system also gives Scania’s customers global access to parts and fast, reliable services with similar workshop methods, while maintenance work will also be more efficient.

“The acceptance of this engine has been tremendous. Early production sold out for 2017 and we are taking orders for Q1, 2018,” says Alcalá.

The new 13-liter engine offers up to 800 hp at 2,300 rpm with 2,000 hours a year of commercial use. The workboat rating, is up to 700 hp at 2,100 rpm, and is offered with unlimited annual hours. The ratings offer impressive power while remaining within EPA Tier 3 requirements, and avoids the use of any after treatment.

For export outside the United States, Scania can offer IMO II complaint commercial ratings up to 875 hp. RCD recreational compliant ratings will be available up to 925 hp. Both without the need for any after treatment.