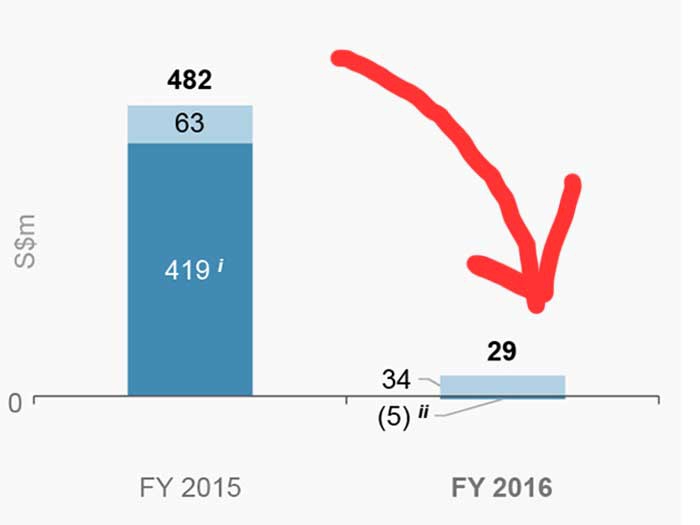 Parent Keppel Corporation Limited today reported that its FY 2016 net profit was S$784 million (US$551 million), down 49% from S$1,525 million (US$ 1,072 million) for FY 2015, due largely to lower contributions from the Offshore & Marine Division and additional provisions for impairment of S$336 million ($236 million), “mainly arising from the rightsizing of Keppel Offshore & Marine.”

Keppel Corporation CEO Mr. Loh Chin Hua noted that the O&M Division had remained profitable despite the sharp downturn, with a net profit of S$29 million for FY 2016.

“Keppel O&M’s operating profit was S$412 million and operating margin was 14.4% for FY 2016, before impairments of S$277 million for fixed assets, stocks & work-in-progress and investments,” he said. “Apart from reducing variable costs, we have also worked on cutting our overheads, achieving cost savings of some S$150 million year-on-year.

“We have responded decisively to the challenging conditions facing our offshore and marine business, not just in anticipation of a long and harsh winter, but also to build a stronger, leaner and more competitive Keppel O&M.

“The painful but necessary measures to rightsize our O&M Division must continue.

“For the whole of 2016, Keppel O&M reduced its direct workforce by about 10,600 or 35%, with about 3,800 in Singapore and 6,800 overseas. Subcontract headcount in Singapore, which has already been lowered significantly, was further reduced by about 3,300.

“In tandem, we are also cutting our yard capacity and have mothballed two overseas yards. In Singapore, we are in the process of closing three yards.”

Keppel says that the yards involved are “secondary” facilities. Though the Singapore yards have not been disclosed, the overseas facilities include one in Brazil and Bintan Offshore in Indonesia.

“We understand the strong headwinds in the offshore industry and continue to work closely with our customers to respond to the challenging conditions,” said Mr. Hua. He said that in 2017, the yards will continue to focus on executing both existing and new contracts well and that Keppel expects to deliver some 20 newbuild and conversion projects.

“Beyond dealing with immediate challenges, Keppel O&M is also positioning itself for the upturn,” said Mr. Hua.

“We are investing prudently in R&D and building new capabilities while looking out for opportunities to service niche, adjacent, or even new markets,” he said. “These include production solutions, non-drilling solutions as well as specialized vessels, such as the three dredgers awarded to Keppel O&M by the Jan De Nul Group in July last year.

“Keppel is also well positioned to address growing requirements across the LNG value chain. In addition, we are exploring ways to re-purpose the technology that we developed in the offshore industry for other uses.

“Ultimately, our efforts are geared towards entrenching our leadership position in the global offshore and marine industry.”