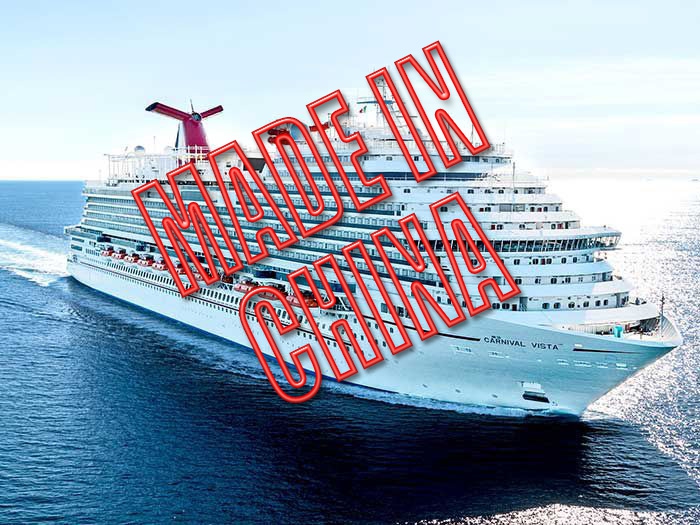 Ship will be based on Carnival's Fincantieri-built Vista class

FEBRUARY 22, 2017 — Carnival Corporation & plc reports that its its cruise joint venture in China has signed a new memorandum of agreement (MOA) to order the first-ever cruise ships built in China for the Chinese market.

The new MOA was formalized during an official signing ceremony held today at the Great Hall of the People in Beijing, attended by Chinese President Xi Jinping and Italian President Sergio Mattarella.

As part of the new MOA, Carnival Corporation’s cruise joint venture in China agreed to order two new cruise ships to be built by a China-based shipbuilding joint venture between CSSC, the largest shipbuilder in China, and Italy-based Fincantieri S.p.A.

Based on its global expertise as the world’s largest cruise company, Carnival Corporation will operate and manage all cruise ships owned by the cruise joint venture as part of its plans to launch the first multi-ship cruise brand in China. The two new ships will be built with a design tailored for the cruise brand and the specific tastes of Chinese travelers. Under the agreement, Carnival Corporation will provide onsite supervision and support during ship construction. The first of these ships is expected for delivery in 2023.

“We are proud to order the first China-built cruise ships and play a meaningful role in developing cruise shipbuilding capabilities for the first time in China,” said Arnold Donald, CEO of Carnival Corporation. “This represents another important milestone in building a sustainable and prosperous cruise industry, and demonstrates our commitment to contributing to China become a leading cruise market as part of its five-year economic development plan.”

“Our cruise joint venture’s agreement to order the first-ever cruise ships built in China and specifically designed for our cruise brand to serve Chinese guests is a tremendous opportunity to grow interest and demand for cruising as part of China’s rapidly expanding tourism market,” said Michael Thamm, group CEO, Costa Group and Carnival Asia. “We are very committed to working closely with our partners to further develop the Chinese cruise industry and continue supporting China’s efforts to become one of the leading cruise markets in the world, which will remain a key driver for cruise growth across Asia for many years to come.”

“Following the five concepts of innovative, coordinated, green, open and shared development, CSSC is working closely with international partners like Carnival Corporation and Fincantieri to build the first cruise ships in China, which will significantly advance the rapid, sustainable and healthy development of the Chinese cruise industry,” said Wu Qiang, president of CSSC. “Global economic integration is still an irresistible trend. Our close partnership with Carnival Corporation and Fincantieri, with the aim to build cruises addressing the additional demand from the Chinese and Asian market, will let more people enjoy the benefits of globalization and live a better life.”

Giuseppe Bono, CEO of Fincantieri, stated: “Looking at the global scenario means trying to widen one’s boundaries, laying the foundations to further boost business prospects and access more complex markets. It is not possible to maintain a competitive presence in the medium and long term without such a commitment. We therefore believe that today’s agreement is an example of industrial partnership that not only reaffirms our leadership in the cruise industry, but also creates a virtuous system among the two countries.”