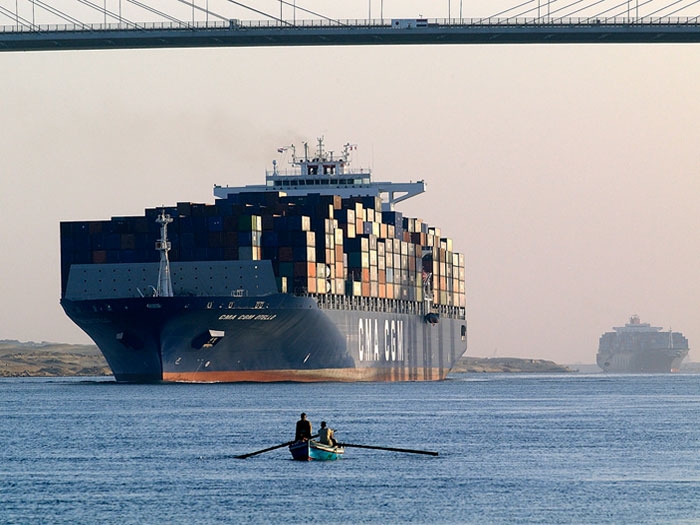 The $9 billion project is an important linchpin in the President’s economic plan for Egypt. Egyptian officials hope to increase revenues form the Suez Canal from a projected $5.3 billion in 2015 to $13.2 billion by 2023.

The project involved dry digging of 37 kilometers and effectively created a parallel second lane and widened and deepened 35 kilometers of the existing canal. The 119-mile Suez Canal—the longest in the world—was first built from 1859 to 1869 under the supervision of Ferdinand de Lesseps to allow ships to cut thousands of miles off of their routes and avoid sailing around Africa.

Container shipping company CMA CGM Group, for example, says using the Suez Canal enables them to cut 7,000 kilometers off of the distance between Jeddah and Rotterdam, and by 10 days the sailing on its CMA CGM EPIC service, compared to the route via the Cape of Good Hope. CGM CMA says its ships sailed 637 times through the Suez Canal in 2014. His is expected to increase in 2015.

Nicolas Sartini, CMA CGM Group Senior Vice President Asia to Europe trades, says “The New Suez Canal finalization is a major event for us. Our vessels use that strategic route serving the world’s main markets each day. Traffic through the canal being more fluid and transit times shortened, our Group will improve its clients’ offer and its service reliability.”

The New Suez Canal is expected to double the transit capacity by 2023. The canal handles an average 49 vessels daily, which is expected to increase to 97 in 2023. Transit times will also be decreased from 18 to 11 hours for northbound convoys by reducing vessels’ waiting time and enabling a continuous and simultaneous vessel sailing.

Great Lakes Dredge & Dock, Oak Brook, IL, along with its Consortium partner Dredging International NV, was responsible for dredging about 40 million cubic meters to -24m depth along a 29.5 kilometer stretch of the canal for a contract value of $600 million. Great Lakes mobilized its Middle East-based heavy duty, high production cutter suction dredges, the Carolina and the Ohio, as well as their auxiliary support equipment and the trailing suction hopper dredge Sugar Island, to execute its portion of the work. Originally scheduled to be completed in the third quarter of 2015, the project was accelerated to be completed well ahead of schedule in anticipation of the new canal inauguration ceremony.

David Simonelli, President, Dredging Division, says, “The New Suez Canal project was an incredible achievement not only for Great Lakes and our partner, Dredging International, but for the global dredging community that worked on this major undertaking. Great Lakes was pleased to work again with Dredging International on the world stage executing this monumental project that will foster economic growth in the region and improve global trade.”