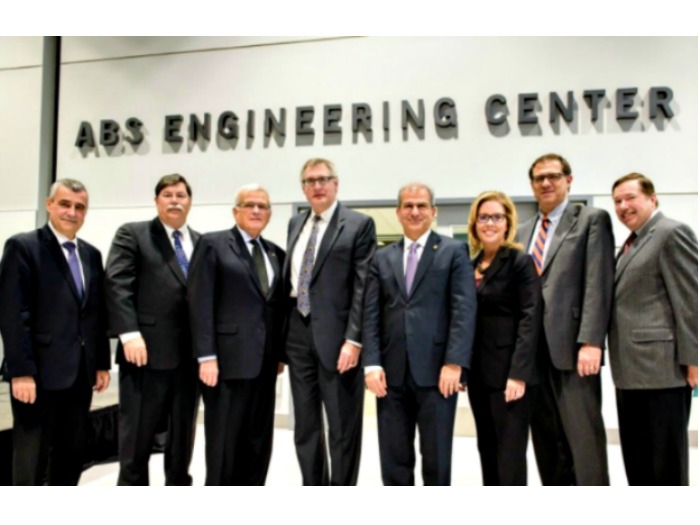 Addressing those in attendance at the dedication ceremony on November 17, ABS Chairman, President and CEO Christopher J. Wiernicki said, “The ABS Engineering Center provides an environment both for learning the various engineering disciplines and for looking ahead toward new technologies that could transform the marine industry. Over the years, ABS and Stevens have been aligned with a mutual purpose of fostering learning and advancing innovation for the next generation of leaders. As a global technology leader, ABS is committed to supporting research that enhances safety in the marine and offshore environments. We are excited to see the donation we made several years ago come to life today, and about what the future holds for the ABS Engineering Center and Stevens.”

The new ABS Engineering Center was built in what was an Experimental Towing Tank, which when it opened in 1944, was probably the world’s most advanced and high-speed towing tank. The tank was used extensively in the U.S. war effort during World War II, in particular to study seaplane design.

A second floor will feature 13 faculty offices and workstations for up to 16 graduate students, while the third floor will include a 28-seat space for seminars, colloquia and project presentations as well as adjacent space for meetings and social interaction.

Stevens President Nariman Farvardin discussed the strong, historic relationship between Stevens and ABS during the launch ceremony, describing it as a “multi-dimensional partnership that goes well beyond this magnificent new facility.”

That relationship has grown to encompass ABS scholarship support for Stevens undergraduate and graduate students, an internship and cooperative education program for Stevens students, participation in the annual Stevens Career Fair, and research collaborations, including a major new joint research effort in maritime cybersecurity. As part of its mission to promote the security of life, property and the natural environment, ABS commits resources on an annual basis, partnering with universities and collaborating with organizations on research and development projects.

In addition, several graduates from Stevens have gone on to advance their professional careers by working at ABS. Among those on hand at the dedication ceremony was ABS Executive Vice President Ken Richardson, who received his Bachelor in Mechanical Engineering as well as a Master in Ocean Engineering from Stevens Institute of Technology.