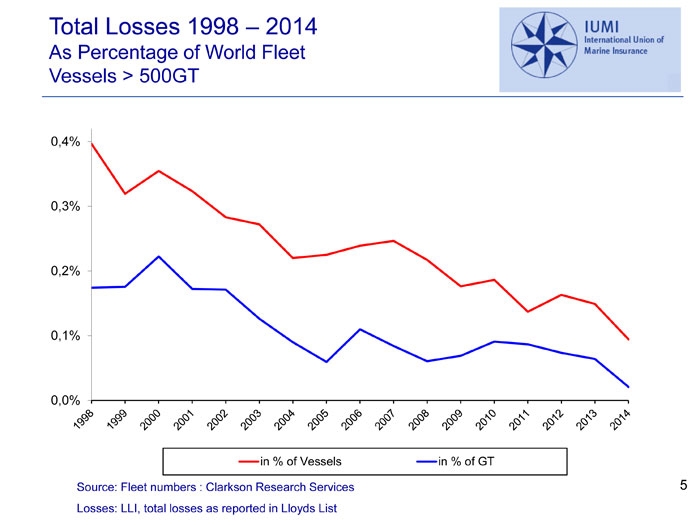 MARCH 31, 2015 — The International Union of Marine Insurance (IUMI) has released its Spring Statistics. They show a continued reduction in total losses. However, the costs of salvage and wreck removal are “dramatically” increasing and “in general, exposures and risks are growing in size and complexity.”

Personal accident (PA) casualties were also reduced year-on-year during the period 2007-2014. Groundings are reported as being a significant cause of this type of casualty.

Cargo market statistics indicate the global economy is continuing to recover, although it remains volatile and uneven, and there has been a recent slowdown in key emerging markets such as China, Brazil and parts of Europe. Despite this continued recovery, inflation is likely to remain a factor due to the extent of economic slack in the major economies and the short term market interest rates continuing to be very low.

The cost of salvage and wreck removal is also dramatically increasing – it is estimated that Superstorm Sandy is the sixth costliest event in global insurance history.

Cargo theft, mysterious disappearance and the misappropriation of cargo is also growing in severity.In general, exposures and risks are growing in size and complexity and these will require stable solutions in the future.

Energy: The energy industry continues to provide profitable results for insurers. The worldwide mobile fleet continues to grow. Although the Gulf of Mexico is showing neutral growth, the rest of the world fleet has increased significantly.

For the first time in recent years utilization rates are down worldwide, with the exception of drillships. Day rates continue to increase in most areas with only a few reductions reported.

Following significant losses experienced in 2013, control of well figures normalized in 2014. Average control of well cost was approximately $14m in 2014 compared with $20m in 2013.

The oil price reduction is expected to lead to less drilling this year.

For platforms and pipelines, attritional loss activity continues to remain flat which follows the long term trend. Significant changes in commodity prices over recent months are likely to lead to operators accelerating the decommissioning of these assets.